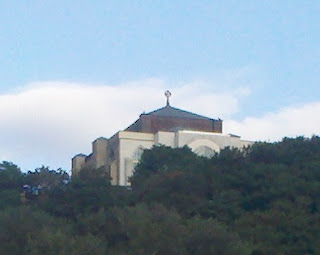 Last week's picture shows the top of Daniels Recital Hall, taken from about the 60th floor of the adjacent Columbia Tower. 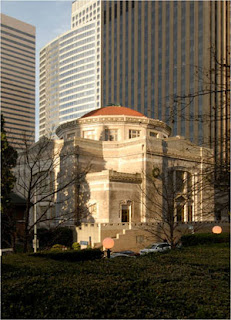 Formerly the First Methodist Episcopal Church, the building was the subject of a protracted fight over its historic status and the right of municipal rezoning to use the site for an office tower. The building is architecturally striking inside and out, built in a Beaux Arts style with an enormous, domed interior space and striking windows:


The First Methodist Episcopal Church Sanctuary occupies the North­east corner of the block bounded by Fifth Avenue and Marion Streets in downtown Seattle. Measuring 165 feet by 114 feet at its base, the building has a stone foundation and a façade of pressed brick and terra cotta. Its form is that of a rectangular box surmounted by a 66 foot high red tiled dome that is 64 feet in diameter.