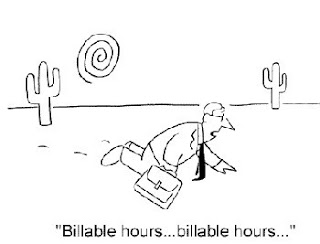 ~ Many startup companies seek funding from investors. There are several ways to structure that, but all require a carefully constructed and legally robust set of subscription documents that memorialize the terms of the investment. It is, in essence, a contract between the investor and the company.

It is easy to make mistakes in drafting these documents, so smart entrepreneurs get legal advice in their drafting. That usually means that an attorney creates the documents afresh rather than simply reviewing something the entrepreneur cobbled together from previous documents or from the Internet.

The problem? The cost is breathtaking, and consumes a substantial amount of precious capital the startup would rather use building the product or engaging customers.

How much? Too much:


Several law firms in Silicon Valley make their money by helping these startups get up and running, often for a hefty price. In 2011, Silicon Valley attorneys made an estimated $37 million in revenue from startups alone. Most of the money that startups raise in their first rounds of funding goes directly to legal fees; the average bill for series A financing is over $50,000.

In truth, most of these funding documents are pretty darn close to boilerplate, and it is not at all obvious that each is created from scratch by attorneys. As an entrepreneur it is tempting to make these myself, but investors are, perhaps justifiably, skittish about signing documents not vetted by an independent legal authority.

The solution? Simple: One standardized set of investment documents with blanks any entrepreneur can fill in and which are valid for raising investor money in any state. Use of these documents should provide a legal safe harbor for entrepreneurs if the form is filled out accurately.

In addition, those standard documents should also replace the patchwork of filings that entrepreneurs raising investor capital must do with government regulators. Raising investor capital requires a so-called Regulation D filing at the federal level and in, in general, in each state from which the company raises money. (This is for the most common method of using an exemption from securities regulation under Regulation D; usually Rule 506.) These forms and the rules for them are different state-to-state, and the redundancy is aggravating at best. The fedeal government already regulates nearly $1T in annual investor fundraising under Regulation D's Rule 506. How hard would it be to create this template document and, under the Commerce Clause, require all states to use it?

It should be easier to build startups; this is just one of several ways our legislators could do something useful to advance entrepreneurship and the economic and job benefits the startup ecosystem can create. Talking about this is good; doing something practical is even better.
Posted by Unknown at 11:46 PM