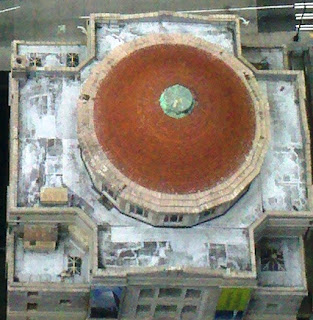 Last week's picture shows the stacks on the Zymogenetics building in South Lake Union near Fairview and Eastlake. 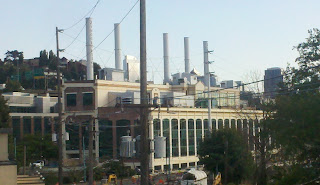 The stacks date to the building's original owner, municipal utility Seattle City Light, which built the original steam plant, designated as an historic city landmark in 1988:


It’s the place that generated electricity back in the city’s early days, fell into disrepair, and was reinvented into a modern gem of biomedical research in the 1990s. Even Northwesterners who know nothing about biotech know that this landmark at 1201 Eastlake Avenue East, with the restored smokestacks, is one of the city’s iconic locations, seen by thousands every day as they drive down Interstate 5.

There’s some fascinating recent history to this building, first built in 1914. The power plant was de-commissioned in 1987, declared a landmark the following year, and sat vacant for several more years. By 1993, ZymoGenetics, which was owned by Danish drug giant Novo Nordisk, bought the building and the adjacent Hydro House, and agreed with developer William Justen to spend $25 million to transform them into a biotech center. The following year, the city passed an ordinance which essentially mandated that anyone who wanted to alter the exterior of the building would need approval from the city’s Landmarks Preservation Board.

ZymoGenetics, which lived large for many years as the research wing of Novo, turned it into one of the iconic headquarters buildings in Seattle. It took a ton of work—ZymoGenetics chairman Bruce Carter called it “the mother of all fixer-uppers”... It’s hard not to admire the tasteful art collection on its walls, the central foyer decorated with flags that represent the multi-national heritage of its employees, and the gorgeous views of Lake Union for its scientists. The place even has kayak access along the lake, and employees are known to sometimes do a little rowing during breaktime.