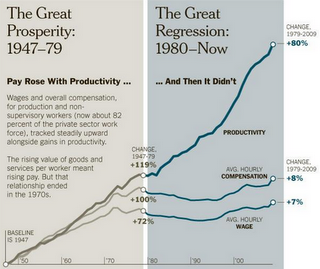 ~ Our core economic problem of the past 10+ years is lack of consumer (i.e. middle class) demand for goods and services. That lack of demand is the result of wage stagnation and wealth destruction of assets such as housing values. People feel (and are) poorer, so they buy less. Reduced demand impels companies to curtail production and hiring. Fewer available jobs with a greater supply of workers adds to the wage pressure. It's a vicious circle.

Henry Ford, whatever his faults, famously understood that wages and profits are linked. Neither can be sustainably increased alone:


From 1948 to 1973, the productivity of all nonfarm workers nearly doubled, as did average hourly compensation. But things changed dramatically starting in the late 1970s. Although productivity increased by 80.1 percent from 1973 to 2011, average wages rose only 4.2 percent and hourly compensation (wages plus benefits) rose only 10 percent over that time, according to government data analyzed by the Economic Policy Institute.

At the same time, corporate profits were booming. In 2006, the year before the Great Recession began, corporate profits garnered the largest share of national income since 1942, while the share going to wages and salaries sank to the lowest level since 1929. In the recession’s aftermath, corporate profits have bounced back while middle-class incomes have stagnated.

The disconnect between wages and productivity is not attributable to low-wage competition from developing economies such as China—it is a uniquely American phenomena and precisely parallels the trickle-down fetishism that has been thrust upon us since the Reagan Administration. We have been led to believe that we needn't directly address the income needs of the middle class because it will work better to give to the rich "job creators" who in turn will give to everyone else. But that hasn't worked.

he problem with the shrinking middle class is not that employers lack the wealth to maintain fair wages, it's that, unlike Ford, they've chosen not to do so. Corporate coffers are flush with cash like never before, yet inflation-adjusted wage growth has actually turned negative for some sectors. Adding to that available cash by engorging them with even more tax cuts will do nothing except enrich the already wealthy while impoverishing the country as a whole.

Breaking the vicious circle will require changing the dynamic at some point, by increasing consumer demand, buying more, hiring more workers. The key is to restore wealth to the middle class. One way to do that would be to increase, not decrease wages. Ford knew that and his company thrived. Our modern corporate chieftains, even at a local level, should give that proven technique a try.
Posted by Unknown at 10:59 PM