~ As the old saw puts it, who will buy the cow when you can get the milk for free? Naked Capitalism:


[As] the chart below underscores, the US changed in the early 1980s from a model where rising worker wages were seen as the driver to ...growth and hence a focus of policy, to one where rising consumer debt levels and asset appreciation were used to substitute for stagnant incomes. 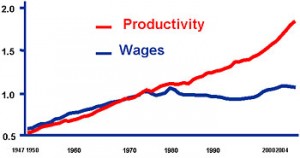 There are some disturbing parallels to the rise in the value of slaves prior to the Civil War, and the insight into capitalist thinking is disquieting in light of current events:


The McKinsey report looked at the world’s 30 largest companies between 1995 and 2005, and found that their return on human capital more than doubled, from an average of $35,000 profit per employee to $83,000, leading to this rather frank and nauseating conclusion:

Extracting rent from “employees” as a business strategy: This is supposed to be the language of feudalism, not modern advanced capitalism — and yet this is the cutting edge in 21st century capitalist thinking, unashamed and unvarnished:


“One way to improve a company’s profit per employee is simply to shed low-profit employees. But if they generate profit greater than the cost of the capital used to support their work, shedding them actually reduces the creation of wealth.”

As with slave stock in a Southern investor’s portfolio, the McKinsey report argues that as a corporation learns to successfully extract rent from its employees, the more employees it extracts rent from, the greater its aggregate profits.

Yuck. Here's a better version of the same graph at the top of this post: 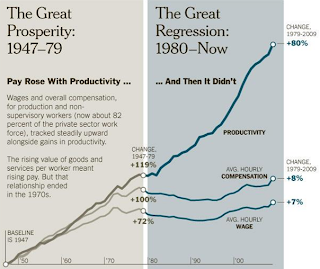 As wages continue their 30-year long stagnation in real terms, one must ask: cui bono?
Posted by Unknown at 11:23 PM