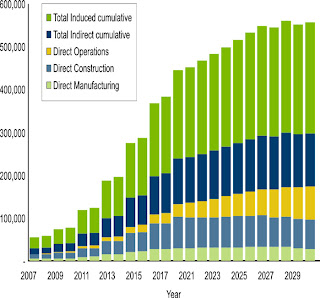 ~ Renewables and the environment are leading the economic recovery. You might think our national politicians would pay attention and move to encourage and support this industry.

You would be wrong:


The renewable energy industry's hope of extending a slew of federal programs was easily defeated on the Senate floor Tuesday.

Sen. Debbie Stabenow, D-Mich., had introduced an amendment to a transportation bill that would have, among other things, extended the Production Tax Credit for one year and revived the expired 1603 Treasury grant.

But that amendment fell far short of the 60 votes required as Senators split 49-49, according to a message sent by the Solar Energy Industries Association on Tuesday afternoon.

According to American Wind Energy Association CEO Denise Bode, the loss can be readily quantified:


“The clock is ticking and the stakes for a timely extension of the PTC could not be clearer," said Bode. "We stand to lose one of America’s best new sources of American manufacturing jobs. With every day that goes by, layoffs are occurring and further job losses and even plant closings will accelerate with each month we near expiration in December. Economic studies have shown that Congressional inaction on the PTC could kill 37,000 American jobs, shutter plants and cancel billions of dollars in private investment.

Meanwhile, the GOP, whose Senate representatives voted unanimously to scuttle the PTC, continue to shill for the Keystone XL pipeline. They claim it would create 20,000 jobs, barely more than half of those in the renewable sector, but those claims are suspect at best.

As many wags have already remarked, the GOP would seem willing to sacrifice tens of thousands of jobs in order to deny one person—the President—his job. Whatever happened to "Country First"?
Posted by Unknown at 11:13 PM