~ The number and fervor of those seeking to stop the Keystone XL (KXL) pipeline is awesome:


An estimated 10,000 to 12,000 protesters converged on the nation's capitol Sunday to press President Obama to block construction of the 1,700-mile Keystone XL pipeline, which would transport tar-sands oil from Canada to refineries on the Gulf of Mexico.

There were more than enough protesters on hand to link arms and entirely encircle the White House compound.

Later today, and doubtless in a complete coincidence of timing, it leaked out that Obama may defer the decision (which he will make personally) until after the 2012 elections. The delay will likely please few, and make KXL even more of a political football; it's highly unlikely the issue will engender a thoughtful, fact-based election debate on energy policy.

Instead, we will get the usual dissembling from the API and others about how the project is supposedly a choice between developing desperately needed sources of energy in an environmentally responsible manner or not developing them at all. And of course, we'll hear about all those jobs it would allegedly create. Never mind that the job figures are likely bogus, and the numbers simply output of the fossil fuel echo chamber. 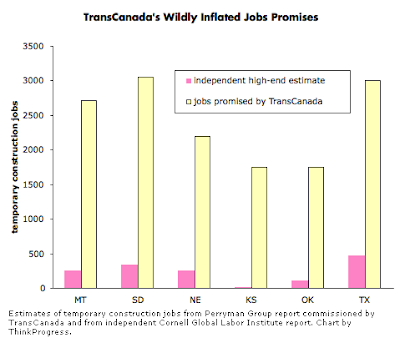 Expect overheated accusations against Obama for delaying the decision, and much wailing and rending of garments about the unconscionable cost to the Big Oil entities involved. Those of us advocating a saner path—the commitment to renewable energy sources—can lean back in our chairs, arms crossed in sardonic satisfaction. KXL makes strange political bedfellows, is a terrible idea worthy of fervent opposition, and it's hard to be sympathetic to the mighty fossil lobby over a delay of only a year or two. Not until they see the kinds of delays that renewable energy projects suffer should their complaints be prioritized.
Posted by Unknown at 11:13 PM