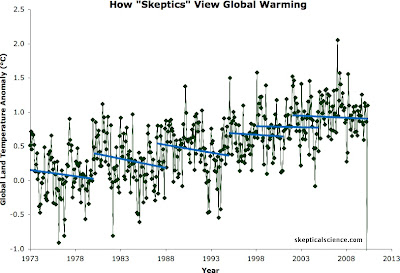 ~ The graphics above show an example of how deniers try to use bogus "science" to cast doubt on climate change: reliance on the selective and misleading use of data. "Skeptical" journalists (and bloggers) through laziness or ulterior motive would flunk a statistics class:


“...what they have done is an old trick. It’s how to lie with statistics, right? And scientists can’t do that because 10 years from now, they’ll look back on my publications and say, ‘Was he right?’ But a journalist can lie with statistics. They can choose a little piece of the data and prove what they want, carefully cutting out the end. If I wanted to do this, I could demonstrate, for example, with the same data set that from 1980 to 1995 that it’s equally flat. You can find little realms where it’s equally flat. What that tells me is that 15 years is not enough to be able to tell whether it’s warming or not. And so when they take 13 years, and they say based on that they can reach a conclusion based on our data set, I think they’re playing that same game and the fact that we can find that back in 1980, the same effect, when we know it [was] warming simply shows that that method doesn’t work. But no scientist could do that because he’d be discredited for lying with statistics. Newspapers can do that because 10 years from now, nobody will remember that they showed that.”

That's a large reason why the media paints a different picture than real climate scientists—they're not accountable.

The graphic and an excellent companion explanation comes from the web site Skeptical Science, which shows very clearly what scientific skepticism really is, and the true motivations of self-styled "skeptics" of anthropogenic climate change:


Often, the reason for disbelieving in man-made global warming seem to be political rather than scientific. Eg - "it's all a liberal plot to spread socialism and destroy capitalism". As one person put it, "the cheerleaders for doing something about global warming seem to be largely the cheerleaders for many causes of which I disapprove". However, what is causing global warming is a purely scientific question. Skeptical Science removes the politics from the debate by concentrating solely on the science.

There's considerable content on the site that uses hard science to reveal those opposed to meaningful action on climate change are not skeptics, but deniers—the opposition uses supposed scientific uncertainty as a cover for a political or mercenary reason.

Update: Apparently the animated gif of the Skeptical Science web site won't animate in Blogger. (Why?) So I have pasted in the other ("skeptic") view of the same data. Click through to the original to see the animation.
Posted by Unknown at 11:56 PM