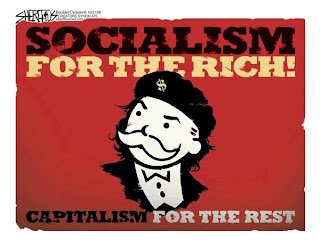 ~ Milton Friedman writes in the first paragraph of his much-cited 1970 NYT Magazine essay:


Businessmen believe that they are defending free en­terprise when they declaim that business is not concerned "merely" with profit but also with promoting desirable "social" ends; that business has a "social conscience" and takes seriously its responsibilities for providing em­ployment, eliminating discrimination, avoid­ing pollution and whatever else may be the catchwords of the contemporary crop of re­formers. In fact they are–or would be if they or anyone else took them seriously–preach­ing pure and unadulterated socialism.

Business has only one purpose—maximizing profits—and only one constituency whose desires should be heeded—its owners (shareholders.) Ayn Rand uses cartoonish caricatures in more than 1000 pages of turgid prose and to reach the same simple statement, and imputing an ethical foundation more pithily put in Wall Street—greed is good.

Events of the past few years have shown beyond any credible dispute that greed is good only for a privileged or lucky few; most have fared much worse due to the effects of others' greed.

The single-minded pursuit of maximizing shareholder value has not—as Friedman, free-market fundamentalists and Randian objectvists insist—also created the best outcomes for other stakeholders—employees, customers, vendors, community and environment. The rising tide may lift all boats, but that's great only if you're luck enough to have a seaworthy boat. Too many simply drown. Reduced wealth, reduced employment opportunities, reduced vitality of our communities, and reduced environmental health have not lead to corrective changes in business behavior that re-align shareholder and broader stakeholder interests.

In the rarefied rafters of corporate power it's still all about profit. And profit for each individual company may not mean profit for business as a whole. Friedman and the other gospels of greed glorify Mammon so much they overlook the essential interconnections between businesses and the melieux in which they operate. It wasn't always so. Business and community have always shared both benefits and costs.

In the short term, shareholders can benefit in isolation. Longer term however, no corporation is an island in the economic sea; ultimately, business only benefits if those around the business also do. The health of the enterprise depends on the health of those other stakeholders. Henry Ford knew that his workers had to be paid enough of a wage so that they could buy his cars. Businesses cannot survive where communities decay. And the environment can only be despoiled so much; there is no business to be done on a dead planet. Says R. Edward Freemanof University of Virginia's Darden School of Business:


I actually think if Milton Friedman were alive today, he'd be a stakeholder theorist. I think that he would understand that the only way to create value for shareholders in today's world is to pay attention to customers, suppliers, employees, communities, and shareholders at the same time. What Friedman was against was the idea of social responsibility that doesn't have anything to do with business. I'm against that too. I think stakeholder theory is a theory about business, but community and civil society is absolutely central to business. We need corporate stakeholder responsibility. If we have that, there's no conflict between shareholders and stakeholders.

Business also has costs that are not borne by the shareholders. These externalized costs must be paid somehow, and if the corporations and their shareholders aren't paying then the other stakeholders are. The myth of the self-made businessman is just that—a myth. Leonard Hobhouse:


The organizer of industry who thinks he has 'made' himself and his business has found a whole social system ready to his hand in skilled workers, machinery, a market, peace and order -- a vast apparatus and a pervasive atmosphere, the joint creation of millions of men and scores of generations. Take away the whole social factor, and we have not Robinson Crusoe with his salvage from the wreck and his acquired knowledge, but the native savage living on roots, berries and vermin.

The supportive context of society allows business to avoid all kinds of costs that make its success more likely. Elizabeth Warren updates the core truth:

Now look, you built a factory and it turned into something terrific, or a great idea? God bless. Keep a big hunk of it. But part of the underlying social contract is you take a hunk of that and pay forward for the next kid who comes along.

George Will and others decry the "twisting" of the social contract and allege that Warren and others attack a "strawman" that individual action has no value. Yet it is Will who sets up the extremist strawman of a false and strictly binary choice between unfettered individualism and soulless collectivism. Neither Warren nor anyone else of any import is suggesting "that any individual’s achievements should be considered entirely derivative from society," or that society "is entitled to take as much as it pleases" of such achievements in some kind of idealized Marxism. However, extremists at the other end of the spectrum are in fact advocating tirelessly for something at least as radical—the evisceration of any effort to address public needs. The public, having aided the individual by creating the environment and support for his success, should benefit as well, yet these radicals of Randian stripe, with a straight face, equate taxation with theft and regulation with oppression.

Friedman concludes his essay with what is the purest encapsulation of the free-market fundamentalist creed:


There is one and only one social responsibility of business–to use it resources and engage in activities designed to increase its profits so long as it stays within the rules of the game, which is to say, engages in open and free competition without deception or fraud.

It is here that the patient observer, blocking out the distracting patter, can at last see behind the sleight-of-hand and the tricky prestidigitation. By cleverly avoiding the use of the passive voice Friedman, like any good magician, misdirects our attention, diverting from that which he doesn't want us to notice:

Who writes the rules of the game?

What referee whistles fouls on deception and fraud?

It is all fine and well to wish that unbridled capitalism engages in a gentlemanly, if spirited contest, where the rules of the game govern and fair-minded sportsmanship triumphs. But if wishes were horses, the homeless would ride. Business rules nowadays resemble Calvinball, and the only inviolate rule of the game is that the game is never played the same way twice, i.e. that there are no rules.

Thus, the quaint idea that business "engages in open and free competition without deception or fraud" is not a rule that need be followed. Nor is it. The Great Recession was triggered in no small part by systemic fraud and a profiteering criminality that was neither open nor free.

Businesses, says Friedman, do not have and should not have any social responsibility. Only people have that.

Citizens United has elevated corporations to a special kind of personhood, one with all rights and no responsibilities. Real people like that have a name, sociopaths, and they cannot be trusted to do the right thing. Of course, Friedman, Rand and others say that this is precisely the point. Maximizing self-interest is in the long-term community interest because individuals can always choose not to associate with the sociopath.

The enough-is-enough public reaction to the sociopathic irresponsibility of business and the lack of any real "rules of the game" is what fuels the Occupy movement. This is what the American identity crisis looks like--do we allow sociopaths in our midst and give them unfettered power to do as they please by using their enormous wealth to rewrite the rules whenever they like?

Add me to the list of those that would like to see such social Darwinists and Masters of the Universe abandon our supposedly confiscatory society and grasping government to pursue their own bizarre idea of utopia. We'd like to keep around those who have a new vision of business, a purpose-driven capitalism that makes business something other than a machine for redistributing wealth regardless of the damage done. Real business leaders can stay; as for the rest, we'd be better off if we let them go Galt and never come back.
Posted by Unknown at 11:58 PM