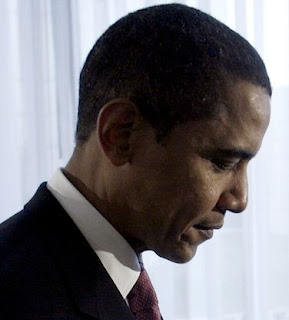 ~ Does real progress on climate change depend on Obama losing in 2012? Political prisoner Tim DeChristopher thinks so. He writes that Obama needs to lose and it needs to be obvious that climate hawks were responsible.


But come 2012, the climate movement will still face that arrogant taunt, "Whaddaya gonna do? Let a Republican win?" If this movement is ever going to get serious political power, the answer needs to be yes. This is where things get dirty. Like any abusive relationship, this movement will always be taken for granted if it's not willing to turn its back on Obama. He needs to lose, and everyone needs to know it was us. Instead of making phone calls for Obama, those who helped him get elected should make phone calls to Obama explaining why they turned.


Climate change is just one of several issues on which Obama is vulnerable to exactly this kind of revolt by former supporters. His positions on many policy issues have been deeply disappointing to his base: keeping Guantanamo going, maintaining warrantless searches and the rest of the Patriot Act, knuckling under to Wall Street, and so on.

Should the left work to defeat Obama? Most won't of course, but perhaps enough will stay home, or vote for a President Romney to make it happen. Those on the left can't win in 2012. If Obama is re-elected he'll just continue his center-right and weak-kneed policies. If he loses, all the professional pundits will portray it as another rejection of liberal policies, despite the fact that Obama is probably to the right of liberals like Richard Nixon.