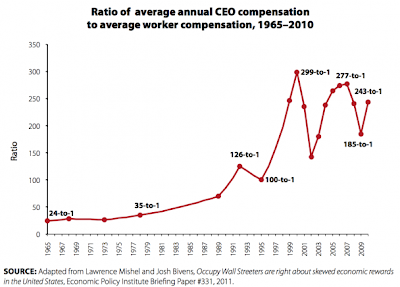 ~ The Occupy Wall Street (OWS) movement puzzles some. How can we explain (or justify) what seems to the passing observer a ragtag bunch of incoherent people protesting ... what exactly?

But that is easier to explain (or justify) than another puzzle. Are the Masters of the Universe really ten times more valuable relative to other workers now than they were in 1965? Are they ten times more productive, more meritorious, more ... what exactly?

I was fortunate to go to a high school that exposed me to some really bright and interesting people, including classmates David Frum and Douglas Anthony Cooper. Some of their recent writing, although from rather different viewpoints, both illuminate ... exactly what all of us are now trying to discern.


Frum is quite well-known, having worked for our most recent incurious Texan-governor-turned-President. (Please, spare us from suffering another one.) His growing disenchantment with the "conservatism" of the current GOP and the unchaining of his inner liberal has been surprising and utterly atypical of those on the right:

Far from it — they’ve doubled down! The federal tax burden has reached a 60-year low — and they are still pushing for further tax cuts. A deregulated financial sector contributed to the excesses that caused the financial crisis, and they’re still fighting, tooth-and-nail, every attempt at reregulation. History and economics tell us that cutting government spending in a period of low or negative economic growth runs a severe risk of slowing growth even further, and yet they’ve made deficit reduction their primary political goal.

In response to one of the greatest economic disasters in recent memory, the American Republican Party has become even more hard-line and rigid in its ideology.

Cooper is less well-known, although he is a vastly better writer and grasps lucidly both the cultural and political heart of OWS:


The protest is not, as some would have it, a cri de coeur aimed at the unfairness of the universe. Nobody is proposing that we mend the cracks in the cosmos.

I suspect that most people would agree, in fact -- after a minute or two of reflection -- that this is a fair summary of the complaint: "The current economic structure of the country is out of balance and favors a very small proportion of the rich over the rest of the country. America needs to reduce the power of major banks and corporations and demand greater accountability and transparency. The government should not provide financial aid to corporations and should not provide tax breaks to the rich."

How often do 76 percent of Americans share the same profound complaint about something this fundamental to the nation? This is hardly a trivial critique: read the statement again. Read it, in fact, as if it had just been released as an official manifesto of the Occupy movement. (Conrad Black has proposed one, but this will do nicely.)

The inequity here is not insurmountable: a structural imbalance caused by ludicrous tax ideas, and by the nation-crippling antics of a small cadre of predatory bankers. These Americans -- all 76 percent of them -- are not wild utopians; their complaint can be remedied by an appeal to good old-fashioned legal and financial rigor. Sanity, however, will not install itself. This will require immense pressure from the ordinary citizen.

This is not just anger at bankers, although it is that too. It is not only frustration at the declining opportunity and living standards of the middle class, although it is that as well. And it is not solely disillusioned cynicism and growing nihilism in the face of a political system that is evermore obviously corrupted by moneyed special interests, but it is without doubt very much also that.

The real fight is much broader and much more fundamental. It is a fight for the very soul of the country, for what America is, could and should be. OWS only appears diffuse and inarticulate because it weaves together all the separate threads of our current problems and synthesizes them into what is the one real, over-arching problem that is only slowing coming into focus: America's Identity Crisis.
Posted by Unknown at 10:46 PM