~ To succeed, entrepreneurs need balance between observing, thinking and acting. It isn't easy.

The father of my wife's youngest son died unexpectedly, and too young, so we've been in Boulder, Colorado the last couple of days making arrangements. Today was tough, especially going through his apartment, his things, his papers.

Later, I went outside our hotel and watched the full moon rise huge and orange. I was joined, abruptly, by this rabbit: 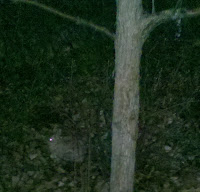 He sat stock-still for nearly 10 minutes. Not so much as an ear twitch. In Bikram yoga, one holds the corpse pose, savasana, for a mere 2 minutes. It is deeply meditative even though it is very hard to be completely still in body and mind for even that short period.

Rabbit is also a power animal, spirit guide or totem:


Rabbit's medicine includes moving through fear, living by one's own wits, receiving hidden teachings and intuitive messages, quick thinking, strengthening intuition, and paradox. Rabbit also represents humility, because he is quiet and soft and not self-asserting. Rabbit reminds us not to be afraid.

I see Rabbit as a good guide for those passing on, and for those of us remaining.

Rabbit is also a good guide for entrepreneurs: be open to your intuitive self, but also have the patience and self-discipline to be still and observe. Then act quickly, boldly, and without fear.