The Regulatory Race to the Bottom 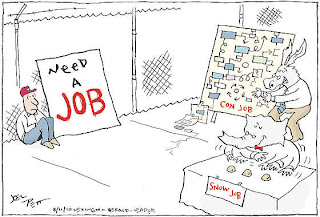 ~ The JOBS Act is part of a broader trend, actively encouraged by large corporations, laissez-faire devotees, and the investor class, relentlessly to pare away regulations, all, we are told, in the name of creating jobs.

Will it? Only if we refuse to notice its fundamentally deregulatory nature, and the 10 facets of insanity that are part of the ideological motivation that produced the bill:


The JOBS Act is insane on many levels. It creates an extraordinarily criminogenic environment in which securities fraud will become even more out of control. One of the forms of insanity is the belief that one can “win” a regulatory “race to the bottom.” The only winning move is not to play in a regulatory race to the bottom.

The seventh form of insanity is that there is no greater killer of jobs than elite financial fraud. Such fraud epidemics can hyper-inflate bubbles (as they did in the U.S. and several European nations) and cause severe financial crises and recessions. The resulting Great Recession has cost over 10 million Americans their existing or future jobs in this crisis. It has cost over another 15 million people their existing or future jobs in Europe. The JOBS Act is so fraud friendly that it will harm capital formation and produce additional job losses. It may appear to be an oxymoron designed by regular morons, but that underestimates the abilities of the lobbyists that drafted this bill. They are not morons. They are doing faithful, clever service to their fraudulent clients. That makes them more dangerous.

The bill's motivation, and its impact, are not about jobs. That's just the marketing. 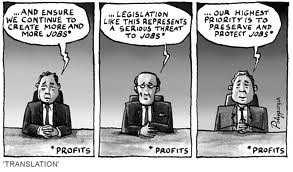 While the bill will almost certainly cause the fleecing of "investors" in years ahead from shady "investments", we needn't wait to see fraud; it's already happened in the successful making of the claim that this bill will create jobs.
Posted by Unknown at 11:59 PM