~ If Republicans were serious about creating incentives for job creation and real "job creators" they would swiftly enact legislation favorable to the renewable energy industry. While the pace of economic growth and job creation has been difficult for a few years, it isn't uniformly bad, as these analytics from LinkedIn show: 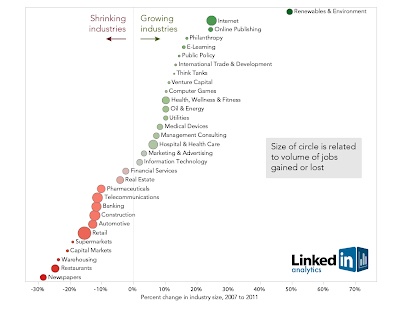 Renewables and the environment are leading the recovery.

Fostering this leading sector wouldn't be hard; they could just continue what has already been proven to work. Examples include permanent Production Tax Credits, restoration of the 1603 Treasury Grant program, and a national Renewable Portfolio Standard.

Sadly, until a Republican is in the White House, they appear to care less about supporting job creation than about supporting so-called job creators, i.e. by passing yet more vague tax cuts for the wealthy with little demonstrated benefit to the broader economy.

The renewables and environment sector has seen huge growth since 2007, despite the Great Recession. Even more interesting is the sheer size of the sector, shown in the graphic as the size of the circle. It's a big industry growing very quickly. It's also a great job creator when the country needs more job growth.

Incredibly, many Republicans are against the very federal policies that helped fuel this growth and which, if continued, could continue to increase it. Encouragingly, there is an effort in the Senate to continue the Production Tax Credit and restore the Section 1603 Treasury Grant program:


But getting to 60 votes [to approve the Senate bill] would be a monumental challenge, especially as the renewables industry as a whole continues to face skepticism from key members of the Republican party. Currently, there are 51 Democrats, 47 Republicans and two Independents in the Senate. Timothy Arcuri, a research analyst with CitiGroup, wrote late Wednesday that his Capitol Hill sources say it is unlikely enough Republicans would sign onto the legislation as it stands.

The amendment is one of 30 that were tacked on in a late-breaking deal. Elements of the Keystone XL Pipeline debate are included among the amendments, as is an amendment by Sen. Jim DeMint, R-S.C., to eliminate all energy tax incentives.

There’s plenty happening outside the Senate chamber as well. This week, Sen. Lamar Alexander, a longtime Republican figure from Tennessee, called on Congress to eliminate its subsidies aimed at the wind industry. Alexander resurrected his critique of “Big Wind,” and the backing it receives from the federal government in a speech to the conservative Heritage Foundation. Alexander said Wednesday that he will introduce a bill to end the Production Tax Credit before it expires.

In the House, Rep. Mike Pompeo, R-Kan., has introduced a bill that would repeal all energy tax credits. Such a bill would affect renewable energy industries far more than fossil fuels. It’s the second time he’s proposed this legislation, the first coming in May when energy policy was not the issue it is today.

Efforts are also underway to repeal or scale back Renewable Portfolio Standards in several states. Despite the value such a national standard would have, there is no credible effort to create one.