Last week's photo was taken from the bus window on my way from scenic Ballard to the University of Washington Campus and depicts the "Wallingford" letters atop the local QFC grocery where Wallingford Avenue intersects 45th Street. 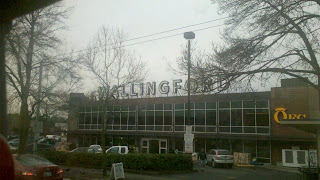 Nothing much remarkable about a local grocery outlet of one branch of enormous food conglomerate Kroger. This location, however, is built on the site of a previous grocery store which in its day had a quirky, cult-like and typically Seattle cachet. I wrote of course about the (self-described) Fabulous Food Giant, where as a young unkempt Microsoft engineer I bought all my food back in the early 1980's.

In the late 1990's the inexorable march of sprawling corporate progress required the removal of the iconic neon signage. After a local uproar, some of the "FOOD GIANT" letters were reused and others newly crafted to place the neighborhood name "WALLINGFORD" in lieu of the name of the supplanted store. From an excellent history of groceries on this corner:


Even now it would not be proper to print FOOD GIANT without using all caps. This is in lingering respect for the independent supermarket’s oversized neon sign, with letters that hollered “cornucopia.” Indeed the letters were so large that they are exactly the same size as those in the “Wallingford” sign put up by QFC in its place... QFC recycled many of the old letters while, without missing a patriotic step, changing the color of the neon gas from red to blue. To do so was something of a citizen-pressured compromise by the food corporation – surrendering its principal blandishment, the roof top sign, to the neighborhood rather than to itself. But then it is best to get along with even the most willful of those who will buy your meat.