The photo last week was taken from Fourth Avenue on the sidewalk next to the Fairmont Olympic Hotel looking up and northwest towards the Cobb Building, a former office building converted to apartments on the corner of Fourth and University. 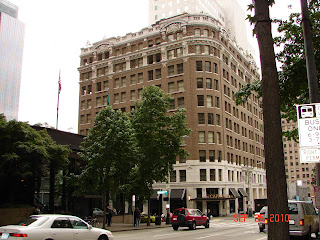 The Cobb is on the National Register of Historic Places, and sits on what was the original site of the University of Washington back in the 19th Century. (This is why the street is called "University" after all.)


The Cobb Building is the only surviving example of the innovative urban design scheme planned to create a commercial center in Seattle... The 1907 Howells and Stokes Metropolitan Tract plan was an innovative urban development considered to be the largest development of a downtown site undertaken to that time in the United States. Their design included a department store, offices, a hotel, housing and a small plaza, all to be built in a similar style and scale.

The Cobb Building illustrates many of the features that the 10 original structures, five of which were actually built, were supposed to share. All were to be 11 stories tall, with terra cotta ornamentation at the top and street levels and brick in-between. Their decoration would combine elements of the Beaux-Arts and commercial styles, such as symmetry and a clearly marked storefront. The Cobb Building was intended, as the plaque of Hippocrates at its main entrance denotes, for medical and dental offices. Contemporary journals identified it as the first building in Seattle, and perhaps the West, to be designed for a single professional use, an innovation that generated a great deal of publicity. Time and commercial pressures have led to redevelopment of the sites that once hosted the other original parts of the Metropolitan Tract, but the Cobb Building continues to look much as it has for more than 90 years. 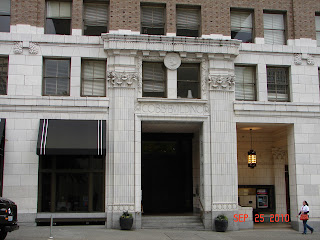