Why Global Warming Can Cause Extreme Cold 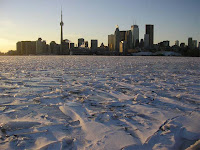 For years thinking people have had to endure the snide remarks and puerile antics from the anti-science pettifoggers, often funded by fossil interests, who aim to thwart action on climate change.

One of their favorite tropes is now a hardy winter perennial: every year, with the arrival of snow and cold we hear from the usual clods something like "Well! So much for global warming!" Recent snow in places that receive it rarely, such as Seattle and England, have encouraged more of this nuttery.

Apart from the obvious fact that winter is colder than summer and sometimes (gasp!) has snow, such ignorant foppotees are just confusing weather—the day-to-day fluctuations of meteorological phenomena—with climate—the decades, centuries, or milennia-long trends in such things as temperature.

There are, for those interested in the methods of science, good explanations for such phenomena. Climate change models predict and explain extreme cold, as well as extremes of precipitation, such as the soaking of southern California and the droughts in Florida.

Also, it turns out that snow in Siberia has a direct effect on snowy cold winters on the US East Coast and elsewhere. Ad hominem attacks on Al Gore aren't needed.
Posted by Unknown at 11:59 PM