Plastic Fouls All Our Oceans

The Great Pacific Garbage Patch is a heaving flotsam of plastic in the North Pacific Gyre. It's bigger than Texas. And it's not the only repository of plastic garbage. 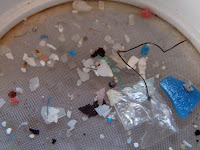 Millions of pieces of plastic — most smaller than half an inch — float throughout the oceans. They are invisible to satellites, and except on very calm days you won’t even see them from the deck of a sailboat. The only way to know how much junk is out there is to tow a fine net through the water.

22 years of towing nets through swaths of the Atlantic Ocean confirm a large plastic garbage patch in its northern gyre too: 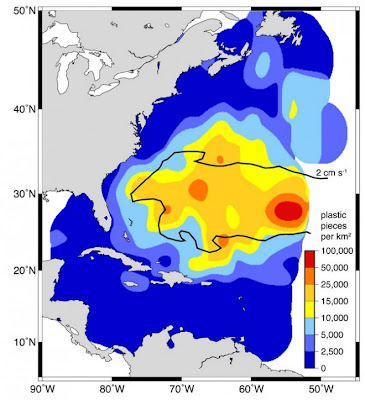 Unfortunately, the plastic breaks down into very small pieces fairly quickly, so it isn't possible to skim and net it out (even if the resources could be found to do so) without also removing vast numbers of ocean organisms. We're left to hope that it can continue to break down to the point where it becomes innocuous. But will it? No one knows where all the plastic goes, but it's likely much gets eaten by marine life, and some of which in turn we ingest. And the danger is not just the plastics, but the chemicals that they leach out. Especially troubling is BPA:


About three million tons of BPA-containing plastics are produced each year. The United Nations estimates that the average square mile of ocean contains 46,000 pieces of plastic trash. “Marine debris plastic in the ocean will certainly constitute a new global ocean contamination for long into the future.”

The plastic already in the ocean is doing its damage, and there's little we can now do about it.

What we can do is stop adding more. Stop buying beverages in plastic bottles, especially water. Choose purchases without plastic packaging. Don't buy things made of plastic where other alternatives exist. Employ reusable cloth or canvas bags when shopping instead of single-use plastic bags. Recycle plastic. Stray plastic eventually finds its way into our oceans, and it can stray, even from trash receptacles, with very little wind or other action.

Plastic is not sustainable.
Posted by Unknown at 11:59 PM