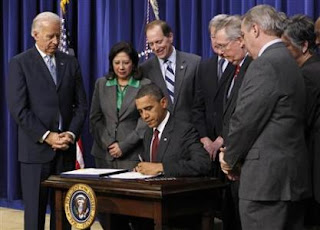 The lame-duck but surprisingly active Congress has packed it in for the year and, along with the President, left town. We should all enjoy the next few weeks and the respite from partisan posturing and wrangling while we can; the 2012 campaign for president will begin shortly.

A few days before signing the multi-partisan tax bill President Obama met for several hours with 20 CEOs from some of America's largest companies. Few details were disclosed regarding what was discussed and what, if anything, was offered by either side. Nonetheless, what was said shed an interesting light on the tax bill.

The deal on tax cuts was a typical Frankenbill, a clutch of ill-fitting parts stitched together to create a lumbering creature, capable of crude actions but devoid of aesthetics and lacking in confident, purposeful direction. The combination of temporizing tax cuts for everybody, coupled with selected stimulus spending is supposed to juice the still moribund economy. Everyone agrees that there are both some useful parts that may help and also parts that are wasteful, but there is much disagreement on which parts are which.

The CEOs were predictably concerned about government regulation and policy, wanting certainty or at least sufficient constancy to make investment decisions. Government needs to provide a stable framework within which private enterprise can thrive. A key element of a successful policy is that it be constant for a long enough period—years—to remove enough of the perceived risk that policy may change again before investments made under the policy have time to mature.

Critically, several of the CEOs also blamed lack of market demand for their reluctance to invest in new plant, equipment, and to hire new workers. Why would they make long-term spending decisions if the demand isn't there to buy the added production capacity? While many see greater demand in the future, that future still appears too distant, and too uncertain, for them to act.

What we know from the meeting between Obama and the CEOs is that the recently passed tax bill satisfies more political needs than economic ones. Tax cuts may have political appeal, but the kind often enacted are worthless as economic policy.

The extension of the Bush tax cuts will give those who pay income taxes more money. Lower-income beneficiaries, in the face of the feeble economic recovery, will likely spend more, which would be stimulative, i.e. add to the demand that CEOs need to in turn spend some of their enormous cash hoard. Higher-income beneficiaries, however, are unlikely to spend more; they already have enough money to spend on whatever they want, and are already doing so. They're rich after all. Companies are also sitting on lots of available cash which they are not spending. Adding to that will not produce more demand, just more supply of cash looking for passive returns rather than being invested in business expansion.

Tax breaks on the estate tax are similar; they add additional cash supply without increasing the market demand necessary to justify investment.

Tax cuts to those who already have more cash than they are spending do not help the economy. The putative rationale for providing tax cuts to corporations and to the rich is that they will use it to create jobs by investing in additional production capacity. But the CEOs themselves rebut that fantasy, because they know the problem is market demand, not lack of funds to invest. Even if they don't say it, they are acting on that truth by not investing all that free cash in their treasuries.

The best parts of the tax bill address what the economy truly needs—increased market demand for goods and services. Unemployment benefits are spent immediately by the recipients and have been shown to have one of the most stimulative effects on the economy of any government policy. Cutting the payroll tax is similar, by putting more money in the pockets of the people most likely to immediately spend it.

The tax bill also extended the Section 1603 grants that foster additional renewable energy projects and capacity. These grants have been shown to create economic activity directly, and especially jobs. This is a helpful part of the legislation, but should be extended for longer than a single year. Again, the constancy of the policy framework matters in deciding on long-term investments. The extension will spur projects in the next year, but not so much manufacturing capacity to make the parts and equipment for such projects. Who will commit to building a plant to make wind turbines or anaerobic digesters when there is only a one year tax benefit to building wind or bioenergy projects? The result may be more projects, but increasingly built of hardware manufactured off-shore. The tax benefits will not produce all of the desired results because they are too short-term.

The tax bill gets some things right, but much of it misses the fattest part of the target. While it may be the only deal that was possible, it is not a good deal for the country's long-term competitiveness, and only an adequate deal for the nearer-term economic need to boost market demand. By supplying too much cash to those least likely to deploy it productively it increases the national debt without getting the benefits that might justify that risk. By making timeframes on the provisions of between one and two years it guarantees that the fight over these things will resume with the new Congress, keeping uncertainty high. That uncertainty then becomes self-fulfilling as money stays on the sidelines waiting for a clearer direction. Government policy needs to set that clear direction and proceed vigorously by example.

The Frankenbill doesn't do that. We are left to hope that the good parts can get the job done and that the useless parts don't cause too much damage. The politics resume shortly. The Frankenbill, unfortunately, will settle none of the politics; regardless of what happens in the economy all sides will claim (often without causal foundation) that their pet parts of the bill were solely responsible for any of the good that results. As a country, we desperately need to get our act together.
Posted by Unknown at 10:11 PM