How Much Water Must We Shale Out?

"We should understand what the impacts on water quality are before we even consider the idea of commercially developing oil shale."—David Abelson, oil shale policy adviser for the conservation group Western Resource Advocates 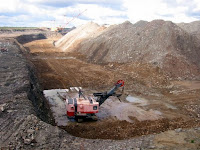 Last Monday the US General Accounting Office (GAO) urged the Department of Interior to take a closer look at the impacts of oil shale development, specifically on water:


Climate change, increasing demand for water from growing cities, interstate water compacts, and needs of threatened and endangered species in the West all could limit how much water is available for oil shale development, the GAO said.

Oil shale extraction uses a lot of water at a time and in a place where competition for water is already acute. It will only grow more contentious, and likely sooner than later.

Based on the average estimates of water use, the oil shale industry might need more water per year than is used by the Denver metro area annually, said David Abelson: "There's going to be less and less new water to appropriate. Use conflicts throughout Colorado, throughout Utah, are only going to increase. The question is, where is the water going to come from and at what expense."


About three barrels of water are needed per barrel of shale oil produced. Water availability analyses for oil shale development were conducted in the early 1980s. These analyses indicated that the earliest constraining factors would be limitations in local water supply systems, such as reservoirs, pipelines, and groundwater development. A bigger issue is the impact of a strategic-scale oil shale industry on the greater Colorado River Basin. Demands for water are expected to continue to grow for the foreseeable future, making the earlier analyses regarding oil shale development outdated.

The BLM, in its own rules, updates the concern:


While it is not presently known how much surface water will be needed to support future development of an oil shale industry, or the role that groundwater would play in future development, it is likely that additional agricultural water rights could be acquired.

There is some disagreement over how much water is needed to extract oil from shale, with industry supporters (unsurprisingly) claiming that there is plenty. That shale developers can simply "acquire" more water is a sheer supposition that critics such as Abelson label industry hopes. Western farmers and ranchers are unlikely to be so sanguine about the acquisition of additional water rights. It's not as if more rights can be created, and no one really knows how much water will be needed without building full-scale facilities. There is only so much water, so acquiring more water rights means someone else will have less water. The inadequacy of the water supply and the fanciful way it is allocated is clear. As the old western saying has it, people talk over whiskey and fight over water. Expect fighting.

The industry has pressed to accelerate oil shale development for years. The fossil-febrile Bush Administration tried to greenlight development in late 2008 with a royalty scheme then-Senator of Colorado Ken Salazar called a pittance. He also criticized the hastiness of the decision in light of the failure to analyze the potential environmental impacts, and for the enormous resource contention that would ensue over dwindling water supplies:


These regulations are premature and flawed. The Bush Administration has fallen into the trap of allowing political timelines to trump sound policy. Over and over again the Administration has admitted that it has no idea how much of Colorado’s water supply would be required to develop oil shale on a commercial scale, no idea where the power would come from, and no idea whether the technology is even viable on a commercial scale.

Apart from the water use, there's also the danger of groundwater contamination.

Royal Dutch Shell has more recently invested at least $200 million developing an "In-Situ Conversion Process" (ICP) that heats the shale in the ground to extract the liquefied kerogen which would then be refined into various petrochemicals:


In a nutshell, ICP works like this: Shell drills 1,800-foot wells and into them inserts heating rods that raise the temperature of the oil shale to 650 degrees Fahrenheit. To keep the oil from escaping into the ground water, the heater wells are ringed by freeze walls created by coolant piped deep into the ground; this freezes the rock and water on the perimeter of the drill site. Eventually the heat begins to transform the kerogen (the fossil fuel embedded in the shale) into oil and natural gas. After the natural gas is separated, the oil is piped to a refinery to be converted into gasoline and other products.

The actual environmental impacts, like the water usage, are also unknown. Shell's ICP relies on containing the super-heated liquid products under ground, but the efficacy of the freeze-wall technique in actually preventing groundwater contamination is uncertain and may have cumulative impacts that cannot be understood prior to actual commercial production (by which time the damage would already be done.) Reassurances about that the process will be environmentally benign should provoke healthy skepticism after the worthlessness of similar assurances for deepwater oil drilling in the Gulf of Mexico.

There are impacts beyond water. Shale oil uses a lot of energy in its extraction. Shell reports that its in-situ process will have an EROEI of 3-4, although this might change given the enormous energy costs involved in building and maintaining the frozen water "walls" below ground that would contain the heated shale. In comparison, wind power has an EROEI of approximately 20.

Canada's experience with extracting oil from Alberta tar sands is instructive, as the techniques of mining and surface retorting are substantially similar. The Natural Resources Defense Council calls oil shale the "dirtiest fuel on the planet". Says Amy Mall, a Boulder-based senior policy analyst for NRDC, "cooking rocks and scorching the Earth is not a solution to our energy crisis," and estimates four-fold larger emissions than from gasoline production. It's "an enormous threat to our environment and a huge backward step."

The current enthusiasm to develop oil shale should be placed in the context of our overall energy needs. In Alberta, it took 30 years to reach an output of a million barrels per day from the oil sands, a level of production that Shell hopes to reach someday in the Green River Basin. The United States consumes approximately 20 million barrels of oil a day, importing about half that, so, while it would help, oil shale doesn't really change much on energy independence or supply either soon or eventually, while it will quickly change the environment for the worse.

While the role of additional oil exploration and new forms of its production in an overall energy policy are subjects for legitimate debate, the public must demand, and lawmakers must consider carefully the full menu of energy alternatives in light of their widely differing environmental and economic costs. Salazar of course now heads the Interior Department, and has the power to demand full assessments and answers to such questions. It is disconcerting that the GAO would need to publicly make such a statement to get Interior to do its due diligence.

Portions of the above were taken from my earlier post, Shale Game, originally posted 11/19/08.
Posted by Unknown at 11:51 PM