The Endless Promise of Energy Independence

Jon Stewart in one of his typically acerbic pieces on the promise of oil independence: 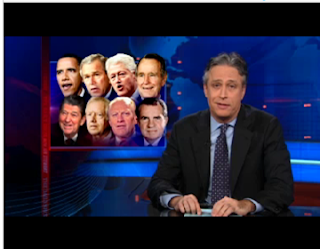 Coming on the heels of President Obama's speech on the BP spill, and with video clips detailing 4 decades of imprecations and high-minded exhortations from 8 presidents, Stewart complains, roughly, "Fool me once, shame on you. Fool me twice, shame on me. Fool me 8 times, I am a freaking idiot."

We fail to demand real action from our leaders, or to hold them accountable for mouthing bromides. With our current president, I fear the audacity hope has become the folly of wishful thinking. As Pogo said, originally in a poster for Earth Day 1970, "We have met the enemy, and he is us."

This was originally posted on the Hydrovolts blog 6/22/10
Posted by Unknown at 11:06 PM