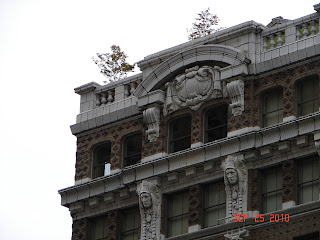 Last week's picture shows the top of the office building at Second and Seneca, sometimes called the Safeco Center, although that's not how it is commonly known. Instead, because of its distinctive domed top, and paying no attention to the absurd scale, it is widely known by most locals as the Ban Roll On Building. 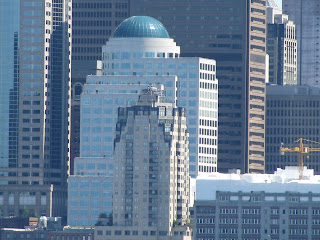 Last week's photo was taken from the top floor offices of leading local law firm Foster Pepper at 1111 Third Avenue. (That building has odd indentations in bands between each floor around the building providing ideal roosting habitat for pigeons.)

The Ban Roll On Building is also known as R2D2 and has some interesting bronze relief artwork.
Posted by Unknown at 11:38 PM