Anaerobic digesters take various kinds of biomass, typically animal manure, and extract methane. The methane can either supply a generator to make electricity, or be used directly as fuel for cooking, heating, or other equipment. The residual liquids and solids can, with some caveats, be used as fertilizer or for soil amendment.

The first anaerobic digester was built more than 150 years ago, but has not previously seen widespread use. That could be changing, for several reasons: preventing uncontrolled emissions of methane, a greenhouse gas 20 times more troublesome than carbon dioxide; mitigating the mountains of manure produced by modern concentrated animal feedlot operations (CAFOs); and generating distributed local power and commercial byproducts that raise revenues and cut costs. 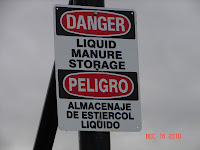 Up in Western Washington's Skagit Valley, Farm Power Northwest is building anaerobic digesters for local dairy farmers. This week I traveled up to the Mount Vernon area and met with Kevin Maas, who, with his brother Daryl, founded and run the company. The rest of this post is mostly photos of the Rexville installation, the company's first, online since August 2009. There's lots of good links and information, as well as pictures of construction on their web site and Kevin's blog. 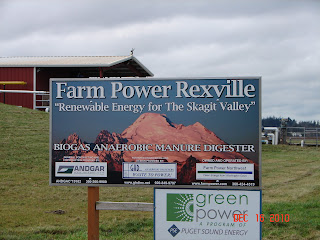 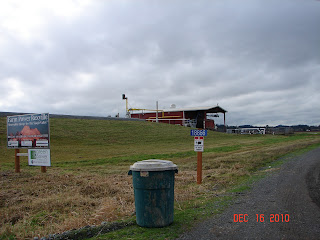 The processing tank was installed just below grade and the sides were mounded up with earth to help insulate the tank. Methane from the tank is piped into the red shed which contains the electrical generator as well as various pumping and other equipment. 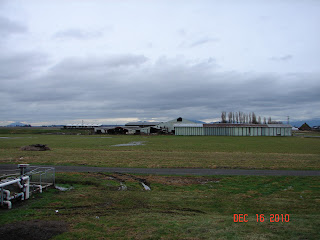 Two neighboring dairy farms with 1,500 cows between them supply the raw manure to the digester. The farms also use both residual outputs: the solid, de-wetted fibers for cattle bedding, and the liquid for fertilizer. The outside tanks of the digester are at the left. 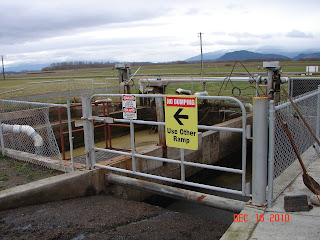 Three outside tanks are used for staging; the leftmost receives trucked in food processing wastes, while the middle one receives the dairy manure. The rightmost holds residual liquids of the anaerobic digestion process. 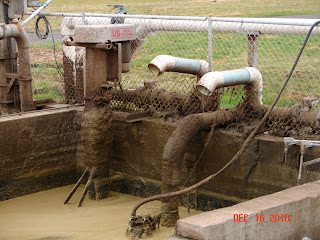 The middle tank receives the raw manure, which is pumped directly from the neighboring dairies. The farmers simply throw a switch as needed to engage pumps to send the manure through underground pipes to the tank. The pipes are positioned spigot-like into the tank to promote mixing of the solids and liquids and prevent settling. 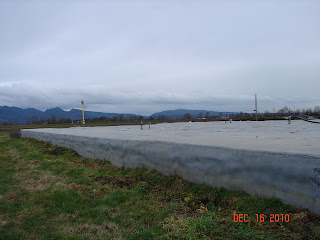 The manure is pumped from the receiving tanks to a massive 1,000,000 gallon and mostly submerged processing tank. The tank is U-shaped internally; the manure spends 30 days traveling from the input end to the output end, as the anaerobic bacteria break it down and produce the methane which is siphoned off the top of the tank and sent to the generator. 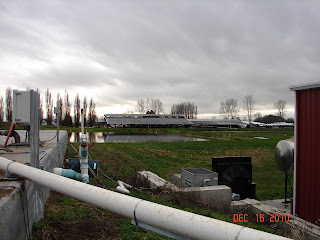 After 30 days of wending through the storage tank, the manure is pumped from the aged end of the tank to the separator. In the distance is an aging lagoon for liquid residuals. 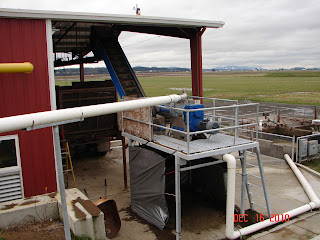 The separator sends the solids up the conveyor where they are dropped into a waiting truck, which takes the largely odorless material back to the dairies for use as bedding. This bedding, somewhat surprisingly, is more healthful for the cattle than the kiln-dried wood shavings used previously. The liquids travel through the white pipe at lower right to the holding tank next to the one where the manure originally was piped in from the farms. 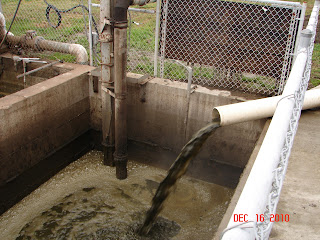 The resulting liquid, rich in phosphorus and nitrogen, and smelling faintly of ammonia, is pumped into trucks where it is taken to the farms for use as fertilizer. Generally it must first be aged in lagoons (resembling large, often rectangular ponds) on the farm.

Overall, the process takes a problem, excess manure, which represents a regulatory and materials management problem, reduces its bulk, produces electricity, and provides useful outputs in the form of fertilizer and animal bedding which can be used right next to where it is produced. 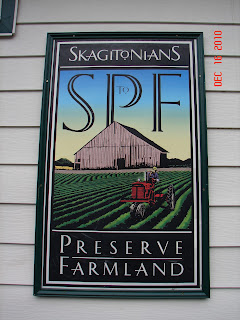 Anaerobic digesters at this scale can help preserve family farms, a critical need not just in our rural communities, but for the health and future of our nation as a whole. 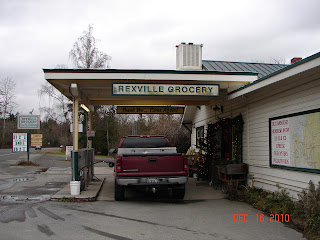 Kevin and I enjoyed a delicious lunch at the Rexville Grocery. Despite it's name they also have a gas pump and a cheerful seating area for eating or lingering over espresso. Outstanding sandwiches and very friendly staff make it a delightful find worth visiting again.
Posted by Unknown at 9:12 PM