Many Approaches to Tap an Underused Resource

Hydropower has many advantages--it is renewable, has relatively low carbon impact, and is fully dispatchable, i.e it can be turned on and off quickly whenever needed. So why aren't we hearing more about hydropower? Why aren't we building more of it?

Hydropower, at least in its conventional form, does have disadvantages, particularly the use conflicts. Water is an increasingly precious resource, and water for hydropower is sometimes water not available for agriculture or for fish migration. Hydropower dams create reservoirs that flood villages and archaeological sites. It changes the character of rivers, destroying fish runs, limiting recreation and changing the very nature of the river.

However, there is more than one kind of hydropower.

Conventional hydropower entails the creation of a pressure differential or head of water, typically by using a dam to create a reservoir and releasing the water through turbines at the bottom. Because of the enormous costs and lengthy site-specific permitting necessary to design and construct the dam, this kind of hydropower is almost always built at a very large scale and requires a major river with significant water flow. Well-known examples include the Hoover Dam, the Grand Coulee Dam, and China's Three Gorges Dam.

Low-head hydropower is produced from a relatively small pressure differential compared to the high-head of big hydroelectric dams. The term is somewhat imprecise as there is no accepted definition of "small" and low-head hydro systems may or may not include a dam. Those without a dam instead employ a penstock, a pipe that diverts water from its source and runs it downhill through a turbine before discharging back into the watercourse.

Run-of-river hydropower is another term that encompasses several different approaches--the common element is that they rely primarily on locations that have sufficient water flow (and usually elevation drop) so that reservoirs of water are not needed. Systems that use a penstock can be called both run-of-river and low-head hydro. Companies like British Columbia's Plutonic Power build these inherently site-specific systems. There is generally no dam, although some refer to locations like Washington's Chief Joseph Dam as run-of-river because the reservoir behind the dam does not store "large amounts" of water. 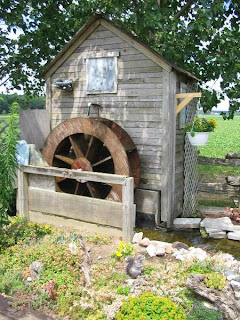 Hydrokinetic hydropower (the approach used by Hydrovolts) entails merely placing turbines in flowing water, and avoids any modification to the watercourse like dams and weirs or diversions like penstocks. Old-fashioned waterwheels are the original hydrokinetic devices (although with a mill pond to create a waterfall they might more accurately be called low-head hydro or run-of-river hydro). The power is produced by the force of the flowing water on the turbine rotor; no head of water is required. 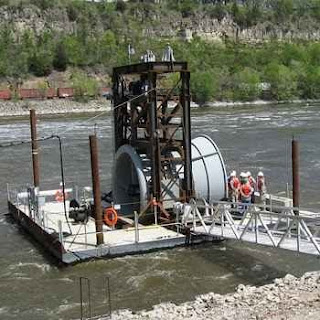 Hydro Green Energy is another company producing such devices, although at a larger scale, using permanent installations and only in the outflows of existing dams.
Micro-hydro refers to hydropower of whatever kind that produces small amounts of power (again variously defined), and may mean low-head, run-of-river, or hydrokinetic devices.

Other hydropower terms are specific to the location. Wave energy refers to a different class of devices for making power from waves in the ocean or on large lakes. Tidal energy uses hydro devices (often hydrokinetic) to make power from tidal flows. Ocean currents such as the Gulf Stream can be harnessed using hydrokinetic devices as well.

The Hydrovolts turbine is a true hydrokinetic device. It could also be termed run-of-river because it doesn't need a reservoir or dam to operate. It can also be used as a low-head hydro device in irrigation canals next to a weir or other check structure. It is micro-hydro because it is designed for small scale, distributed power generation of 5-25kW in a typical flow.

Regardless of how one chooses to name it, the Hydrovolts approach avoids the problems that have prevented more widespread adoption of additional hydropower generation. Because it uses no dams or reservoirs, there is little impact on other users of the water in the flow. Without dams, fish and boats can continue to navigate freely. Water can be pumped as needed for irrigation.

Originally posted on the Hydrovolts blog on 1/3/10
Posted by Unknown at 10:11 PM