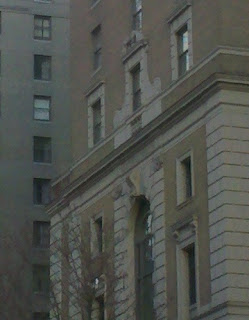 Hint: Although it may not look like it, the picture shows (parts of) only one building.

Last week's picture showed a portion of the interior of King Street Station, the Seattle terminal of both Sounder and Amtrak trains: 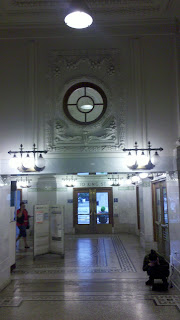 The detail has only recently been uncovered as part of an ongoing renovation of the historic station to restore some of its former grandeur from the days when travel by train was more common. The City of Seattle purchased the building from BNSF in 2008 and is well along on a $50M rehabilitation. The clock tower, modeled on the famous Campanile di San Marco in Venice, Italy, and subject of a previous post, has been repaired, with a new finial and all four clocks restored to full functioning. The original terra cotta roof is back and a modern and energy efficient mechanical plant installed. Last summer the drop ceiling in the main waiting area was removed, revealing again the original high ceilings and ornate plaster work. The final stage of work has been put to bid and should commence soon.
Posted by Unknown at 5:50 PM