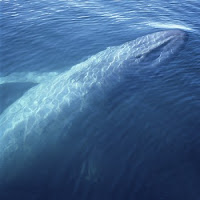 ~ The blue whale is the largest animal on the planet, and it feeds almost exclusively on one of the smallest—krill or plankton, tiny shrimp-like creatures called euphausiids. Each may eat up to 4 tons a day. Their ability to eat enough depends in part on two things: lots of krill in the ocean, and dense concentrations of them that make the feeding process practical in time and energy expended.

Lately, I've been pondering the similarities of blue whales and large banks.

Blue whales are also an endangered species. As more and more of us small fry abandon them for credit unions, will the lack of easy prey make the large banks endangered too?
Posted by Unknown at 10:46 PM