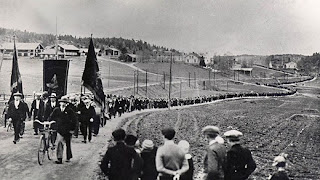 ~ It happened in Scandinavia starting in the 1930s:


While many of us are working to ensure that the Occupy movement will have a lasting impact, it’s worthwhile to consider other countries where masses of people succeeded in nonviolently bringing about a high degree of democracy and economic justice. Sweden and Norway, for example, both experienced a major power shift in the 1930s after prolonged nonviolent struggle. They “fired” the top 1 percent of people who set the direction for society and created the basis for something different.

Both countries had a history of horrendous poverty. When the 1 percent was in charge, hundreds of thousands of people emigrated to avoid starvation. Under the leadership of the working class, however, both countries built robust and successful economies that nearly eliminated poverty, expanded free university education, abolished slums, provided excellent health care available to all as a matter of right and created a system of full employment. Unlike the Norwegians, the Swedes didn’t find oil, but that didn’t stop them from building what the latest CIA World Factbook calls “an enviable standard of living.”

The 1% fought back. There was a mortgage crisis. The conservatives instituted many of the same neo-liberal and regressive policies that have nearly destroyed the US. Political and police repression were tried, but ultimately failed. It took decades to achieve, but today they enjoy a healthy economy, nearly full employment, a strong social safety net, and broad prosperity.

Can we learn from history?