A Tale of Two Regulatory Regimens 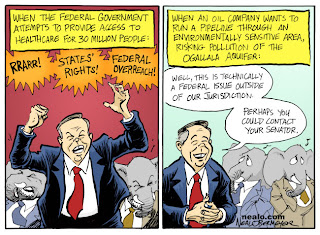 ~ Regulations are for thee, not for me.

Such might well be the motto of the American Petroleum Institute (API), the hyperventilating and richly funded lobbying apparatus of Big Oil in the US. When it comes to regulations on oil and gas, the API affects the highest dudgeon as it rails indignantly against the ostensibly onerous burden saddled upon their industry, which they claim will cost jobs, stunt economic recovery, and make us all more dependent on foreign sources of energy. No surprise, their concern about regulations turns out to be highly selective.

Their current hobbyhorse is the dreadful Keystone XL pipeline, and the are in full throat with a chorus of caterwauling over its (likely temporary) delay. It is hysterical even by their shrill standards. The claims for its supposed job and economic benefits have been forcefully and thoroughly debunked, and the energy security benefit is belied by their resistance to tolerate any interference in their evident desire to export the products of the tar sands once they reach refineries on the Gulf coast. Now the API's allies in the House GOP are trying to ramrod approval by Congressional fiat because, as House Rep Ted Poe (R-TX) says, the decision to deny permitting is motivated by politics.


The bill as written says the oil will be sold to some other country. I will not support that... If we want to wean ourselves from foreign oil, why would we allow a pipeline to be built for 1,700 miles to manufacture petroleum products to be shipped overseas? That's the purpose of this.

The Obama administration justified the decision on Keystone XL because the GOP didn't allow sufficient time to perform a proper regulatory review to ensure that the project was not harmful to the environment and to consumers, especially regarding water supplies in a critical aquifer in Nebraska, a concern shared even by that state's Republican leaders. There is bipartisan support to ensure we protect the country's critical water supplies.

And what of all those terrible regulations imposed on oil and gas drilling? It turns out they are about as feckless as any regulatory oversight could be:


Federal policing of oil and natural gas on public lands is lax and inconsistent, with only 6 percent of violations resulting in monetary fines over 13 years, House Democrats said in a report today.

Fines over that time totaled less than $275,000, an amount that the Democratic staff of the House Natural Resources Committee characterized as little more than “pocket change” for oil and gas companies. The report said federal regulators issued no fines in the period studied, February 1998 to February 2011, in eight of the drilling states.

The report focuses on drilling activity that occurred on federal land in 17 states during three administrations, two Democratic and one Republican. A total of 2,025 citations for safety and drilling violations were issued to 335 companies, the report said, with 64 companies fined a total of $273,875.

The report found that more than 2,000 violations were handed out by the Interior Department to oil and gas companies drilling on federal land. Of these, 549, or 27 percent, were classified by committee staff as a major environmental or safety violation. More than half the major violations stemmed from a nonfunctioning or missing blowout preventer, the same device that failed in the BP oil spill in the Gulf of Mexico, the report said.

A total of 113 major violations cited inadequate well-casing or cementing, another problem that occurred in the BP spill. Onshore, well-casing and cementing are a key defense against groundwater contamination. On at least 54 occasions, oil and gas companies began drilling on federal land before receiving formal approval to do so, the report said.

Regulations, and the penalties for violating them, clearly amount to little more than the cost of doing business. Even these regulations are claimed to be unconscionable, however, notwithstanding the reasonable effort to curtail industry excess that lead to recent financial and environmental catastrophe.

The API is not entirely hostile to regulations, however. On proposed changes to increasing the percentage of ethanol blended into gasoline from 10% to 15% (HR 3199) the API takes a very different kind of position, as stated by Bob Greco, API’s "downstream and industry operations director":


Our first priority should be protecting consumers... Further scientific testing is required, and EPA has an obligation to base this decision on science, not a political agenda.

API "Chief Economist" John C. Felmy frets that a growing regulatory avalanche is a dangerous threat. He worries that too many agencies are getting involved, even as the API supports moving Keystone XL approval to the formerly uninvolved Federal Energy Regulatory Commission (FERC). He adds, in a revealing aside:


We’re looking for a proper level of regulation.

Indeed. What the API is really saying is: regulate and subject to rigorous scientific review anything that might impinge on Big Oil's freedom to further boost its already record profits, but get your already too-weak regulatory mitts off us.

There was a time people thought what was good for GM was good for the country. Now it seems API would like to recast themselves as the latter-day inheritor of that GM mantle. Given their track record, should we trust them?
Posted by Unknown at 11:40 PM