A Philosophy, or an Excuse? 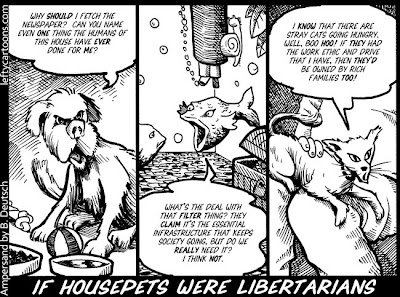 ~ The endless election drags on, and the chorus of government haters is in full throat. They say government is too big, too inefficient, too undemocratic even. How much better it would be to have minimal government!

An astonishing number of people scarf up government-provided benefits in the particular even as they carp about excessive government handouts in the abstract. Bare-bones government is appealing until one realizes that government fills a vital role to ensuring our safety and a modicum of social well-being. Without it we have anarchy, not utopia.

It seems that many who spout about libertarianism are more aligned with the one-time British seaman's selfish "I'm all right, Jack" I've got mine and I'm coming out ahead, so screw all of you and stop taxing me already. It's a peculiar form of moral relativism that's inherently amoral. It's OK for me; it's not OK for you. Why? Because that's the way it is (now.)

Libertarianism doesn't work. It never has.

"True" libertarianism is impossible, because it defies human nature:


As any libertarian understands when it comes to statist authoritarians, power corrupts. Absolute power corrupts absolutely. When you decentralize and remove the modern welfare state, leaving only essentially a glorified police force in charge to protect private property and personal safety, one of two things happens:

1) The central police force turns into a right-wing military dictatorship invested in stamping out all leftist thinking, then appropriating the country's wealth for themselves and their friends (e.g., Chile under Pinochet);

2) All central authority and protection break down completely as power localizes into the hands of local criminals and feudal/tribal warlords with little compunction about abusing and terrorizing the local population (e.g., feudal France, Afghanistan, Somalia, western Pakistan, etc.)

As a nation, we continue to destroy the social safety net, to demonize government, to demand ever-greater tax cuts for the wealthy, to insist on unrelenting austerity for everyone else, to pursue a never-satisfied path of "regulatory reform", and generally to eviscerate effective government. The trend is to less government because we are starving it for revenue and deadlocking action through political stalemate. We have a government in name and in form, but less and less in practical action and effect.

Will we get closer to a libertarian ideal of leaner government? Or something, shall we say, more feudal?


In its own way, the "No True Libertarianism" argument is very similar to the "No True Communism" of those on the far left, who argue that the fault of Communism lies not with the idea, but with the practice--despite the fact that no successful large-scale Communism has ever been implemented in the world. Neither ideology can fail its adherents. They can only be failed by imperfect practitioners.

Both ideologies run counter to human nature for the same reason: power corrupts, and absolute power corrupts absolutely. The people with the money and guns will always abuse the people who don't have the money and guns, unless there are multiple levels of checks, balances, and legal and economic protections to ensure the existence of a middle-class tax base with a stake in maintaining a stable society. The modern welfare state didn't arise by accident or conspiracy: it evolved as a means of avoiding the failures of other models.

Must we fail again? Or can we learn from history?
Posted by Unknown at 11:56 PM