One Dollar, One Vote

Getting What They Pay For

~ Where can you reliably get a return on investment of 22,000%? Not even Wall Street insiders can profit like that consistently, but corporations can. 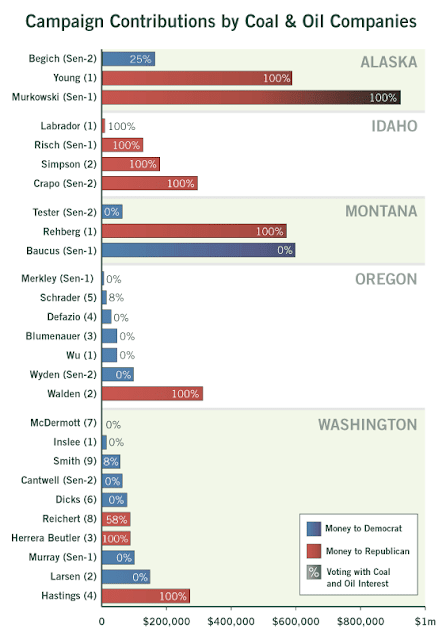 They just "invest" in politicians.


The dirty-energy industry lavishes money on campaigns and lobbying. Not surprisingly, among its favorite sons are Rep. Joe Barton (R-Texas), who famously apologized to BP for Congress’s criticism during the Gulf oil disaster, and Sen. James Inhofe (R-Oklahoma), who insists the science of global warming is a hoax and has likened the US Environmental Protection Agency to the Gestapo. Rep. Barton has raked in $1,914,183 and Sen. Inhofe $1,287,950 from Big Coal and Oil—amounts that bring to mind social critic Upton Sinclair’s observation: “It is difficult to get a man to understand something when his salary depends upon his not understanding it.”

Here in the Pacific Northwest the linkage is clear, with King Coal and Big Oil pouring nearly $5M into the coffers of federal politicians since 1999, a figure which doesn't include corresponding "investments" by those firms' major shareholders, nor any sums given to lobbyists, PACs and the new Super-PACs. The chart at the top shows corporate donations to candidates, and the results they bought.

Money well-spent for those corporate interests, but not so much for the people.
Posted by Unknown at 5:21 PM