~ The US House Natural Resource Committee web site is a showcase for considerable energy wingnuttery, and offers up such a rich trove of balderdash it's hard to pick just one thing. The over-arching theme is the "Anti-Energy Policies" of the Obama Administration, exemplified by this chart: 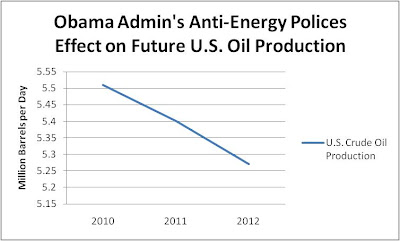 An impressive amount of dissembling has been packed into this one simple chart.

First, and most obvious is that it is only early February of 2012, so the 2012 number on the chart is, at best, an estimate. It's a projection, and if the same slant that pervades the rest of the site guided the production of this number, it is of doubtful objectivity.

Second, the vertical axis is constructed to make the slope of the line seem precipitous. The numbers may be accurate, but it is certainly misleading.

Third, the horizontal axis includes only three data points, one of which (2012) can be dismissed completely. So the evidence in support of the claim that the Obama Administrations is hostile to oil production is reduced to the less than 2% decline from 2010 to 2011. Oh, the hostility!

The selective and deliberately misleading essence of the chart's presentation becomes even clearer when one looks at US oil production over a longer period of time:

The overall decline in oil production from the 1970 peak transcends politics, parties, and policies. The data behind the chart shows the steady decline over every year of the Bush Administration, an eight-year record (by his party's) president on which Hastings was silent.

Notice too, the uptick at the end of the chart. Yep, those are the first two years of the Obama Administration and show the first year-to-year rise in oil production since 1990, and the first two-year rise since the early 1980s. The 2010 figure is higher than any year since 2003.

The Chair of the Natural Resource Committee is Washington State's own Doc Hastings, who uses the position as a soapbox for his annoyingly pinched and tiresomely partisan views on energy. His committee's web site is so full of shamelessly partisan mendacity it's hard to understand why it is paid for by us taxpayers rather than campaign interests, or directly by the fossil lobby. Especially laughable is the submenu choice of "Op-Eds and Speeches" under News, when the entire site is one big and mostly sophomoric opinion piece.

Washington State has an abundance of wind, solar, geothermal, hydro and ocean energy resources, but negligible amounts of oil and gas. Hastings mostly ignores that, however, shilling relentlessly for Big Oil interests, rather than those of the state he represents. His mindless and nakedly partisan bashing of Obama energy policies is an example of all that is wrong with our current Congress, and especially of the degree to which facts can be completely and brazenly ignored for political point-scoring.