The Dangers of Mercantilism 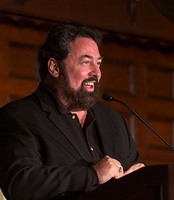 ~ As Yogi Berra famously quipped, it's tough making predictions, especially about the future. But it can be done, and successfully: Mark Anderson is a probing thinker and futurist who can claim that his annual list of top 10 predictions has been proven right 93.5% of the time since he started in 1995.

This afternoon Anderson addressed several dozen visiting students from Shanghai and quite a few entrepreneurs, investors, and other local leaders. His remarks in part repeated (as he confided to me later) speeches he's been giving for about two years. And indeed, many parts repeated what he said last October at the Puget Sound Venture Club's 25th birthday bash.

Today, however, and despite an audience featuring those he characterized as "the future leadership of China", he was quite a bit more blunt than 10 months ago: China is stealing IP as part of a deliberate government policy to expand their economy. This policy of mercantilism is working very well right now, but left unchanged, the policy will hollow out the Chinese economy and be disastrous for China and for the rest of the world. The only sustainable path is nurturing their own indigenous culture of invention.

Japan provides the paradigm of how mercantilism can juice an economy. From utter defeat and the devastation of the Second World War Japan rose to be a global economic power, and is still the world's second largest national economy. How did they do it? They took IP in several areas, including cars, steel, DRAM chips, cameras, and TVs and started making them cheaper and, in time, better. US makers of these products, many of whom had developed the core IP, were either driven out of business or had their market shares severely crimped.

Domestic demand was deliberately depressed and exports boomed. Wealth flowed like a torrent into the country. Globe-spanning corporations like Toyota, Sony and NEC rocketed into the top echelon of international business. Fortunes were made. People were sprinkling flakes of gold on their drinks.

In some ways, mercantilism was Japan's most successful export. Having succeeded wildly with the model, they were quickly copied by the South Koreans, then the Taiwanese, and finally by the Communist Chinese, each taking the existing model with confidence they could improve it. And they did. But today Japan is in the throes of a recession without end. For more than 20 years the economy has struggled with every kind of economic ill. Still large, still important, but stagnant, and unable to respond to the newer, more dynamic countries on the global stage. And, critically, not a source of innovation; not where new, paradigm-changing and wealth-creating IP is made. They have contributed greatly on ISO 9000, TQM and similar management processes, but not at inventing things. Japanese leaders always said that they would eventually get around to inventing their own ideas, creating their own IP, but it never happened. China says the same thing today, but the result will be no different unless they change their IP policy now.

Mercantilism dies because it relies on a flow of outside IP, and eventually, the question is where does that IP come from? Anderson decried the parasitism of those "piling on" IP so much that the creation of it is becoming unprofitable. Our leaders and others go on endlessly about the importance of innovation, but it is the use of innovation that has the real value. (It's all about execution, not the idea.)

China has taken this IP theft to new heights, said Anderson, and it will eventually crash their economy and wreak damage on others, including the US and much of the world. China may think of trade and the global economy as zero-sum (they win and others lose) but Americans have always thought it can benefit all parties. What's needed is to change that mindset and focus on a model that shares IP globally to the benefit of all.

There are several methods China uses to institutionalize the theft of IP, many well-known to US entrepreneurs. IP theft is central to the mercantilist business model, and many government-mandated practices are designed to facilitate it. For example, the requirement to "partner" with a Chinese firm in order to do business, and always taking a minority stake. Another: the requirement to put IP and budgets into China in order to get market access.

In an amusing aside, Anderson drew a parallel between two famous US technology companies and their different emphasis on innovation. Microsoft is the classic "fast follower" of technology, taking innovations wherever they can find them and doing them better. Apple, in the alternative, is radically innovative, and is constantly creating new ideas and products that are original. Microsoft was a juggernaut for years, and created enormous wealth for many people, but is now widely viewed as having lost its way. "They ran out of tail lights" to follow. The stock has been dead money for a decade and the talent flight must be deeply alarming to its executives and board. Apple, in contrast, is the toast of the industry, and has recently eclipsed Microsoft in market value. It is also where the best and brightest want to go to work.

Microsoft is Japan. Will China remain a Microsoft or choose to become an Apple?

Continuing to forcibly steal IP "will damage the global economy" and neither Chinese nor American leadership seems to grasp how pivotal is the choice, not just to the future of China, but of the US and much of the world. There needs to be "a sincere effort to invent, rather than to copy."

Anderson suggests potential for fruitful collaboration on clean energy. Climate change is real and human-caused; hundreds of millions of people will die, trillions of dollars will be lost, and no one wins if we continue to ignore it. "You [students] have nine people [the Chinese Politburo] that are trained as engineers and scientists. We don't." You have an opportunity to lead on this (and we're sorry for our, well, sorry lack of leadership.) Europe would join and the US "would come along, eventually, kicking and screaming."


Thanks to Mark Anderson for again sharing his insights, and thanks to Fortunato Vega for putting this fine event together!
Posted by Unknown at 11:31 PM