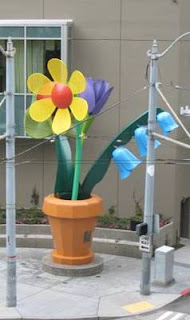 Last week's picture shows detail on the side of the Museum of History and Industry (MOHAI) on the other side of SR-520 from the Arboretum. 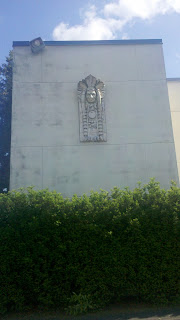 From the MOHAI blog:


This sculpture was originally part of the White/Henry/Stuart complex of buildings which at one time stood on Fourth Avenue between Union and University Streets on a parcel of land known now as the Met Tract, which is owned by the University of Washington and was the original site of the University before it relocated at the end of the 1800s to its current location.

The building was built by the Metropolitan Building Company (hence "Met Tract") The three buildings were built to look as one, although not built all at the same time. The White Building on the corner of Fourth and Union was built first, followed shortly by the Henry Building. Both were finished in 1909. The Stuart Building on the corner of Fourth and University was finished in 1915. The Henry Building was named after Horace C. Henry, a railroad contractor who was also an investor in the MBC.

The White/Henry/Stuart Building was demolished between 1974 and 1977 to build the Rainier Tower and Rainier Square shopping plaza. (It's the building that looks like a pencil standing on its end.) The Indian Head is one of many sculptures adorned the top of these three buildings. It was donated to MOHAI by William Garrard Reed in memory of Horace C. Henry.

Another Met Tract structure was the Cobb Building, still standing at the corner of 4th and University, and the subject of an earlier post.
Posted by Unknown at 9:49 PM