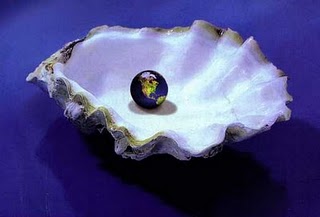 ~ I absolutely love to eat fresh oysters, as do many others; together we eat 700 million farm-raised oysters annually in the US.

So it is distressing to see the unfolding disaster in oyster farming. The fishery has been in decline for decades from various causes, including over-harvesting, disease and toxins. Partially in response, the modern industry now relies heavily on farming techniques, including the raising of oyster "seed" (actually larvae) used to plant oyster beds on both coasts.

Starting in 2007, a series of near-total die-offs started happening at oyster farms and at the hatcheries that supply the oyster seed.

What initially seemed isolated incidents were soon appearing so broadly that the entire industry's survival came into doubt. Diseases can be a problem, but not this time; after an intense search the cause was determined to be increased water acidity:


The culprit behind [the] die-offs, it turned out, was part of a much bigger change in oceans around the world. Called "ocean acidification," it results from too much carbon dioxide in the atmosphere. The sea is the world’s great carbon sink, holding about 50 times as much of the element as the air. Phytoplankton at the ocean’s surface absorb carbon dioxide for photosynthesis, and when the tiny plants die, they sink and decompose, releasing CO2 into the water column. Dissolved CO2 forms carbonic acid, the same weak acid that gives soda water its tang. Cold water can hold more CO2, so the frigid waters at the ocean bottom are more carbon-saturated, and more acidic, than the warmer surface water above.

...that acidified water doesn’t stay down in the deep: it rolls back to the surface along the West Coast and other upwelling zones.

These nutrient-rich upwellings, full of sunken organic matter and minerals, support a famously rich marine food chain, from microscopic plankton to eight-ton killer whales. But if the waters become too acidic, they’re lethal to many shell-building creatures -- including young clams and oysters, whose formative coverings are uniquely vulnerable in their first week or two of life.

The upwelling of this colder, more acidic water was what was killing the oysters, but the story has a happy ending—for now. Oyster hatcheries adjusted by carefully monitoring the water and drawing it into hatchery tanks at carefully selected times and from optimal depths.

However, the future is much bleaker. Being careful about when and from where to draw water works for now, but over time even the "better" water is becoming more acidic. Eventually, the choice will not be between acidic and non-acidic seawater, but between degrees of acidity, all fatal to the oysters. All the seawater is becoming more acidic over time, probably much more so:


Even as the hatchery folks were struggling with acidifying water inshore, scientists from Mexico, Canada, and the United States were documenting similar changes in the waters further out. They found that the upwellings operated on a time lag: The water rising from the depths today holds CO2 absorbed about 30 to 50 years ago, when expansions in transportation, industry, and other human activities began pushing increased amounts of carbon into the atmosphere.

Because carbon emissions have continued rising since, future upwellings are sure to be even more acidic. "We’ve mailed a package to ourselves," says Oregon State oceanographer Burke Hales, one of the scientists who conducted the offshore research, "and it’s hard to call off delivery."