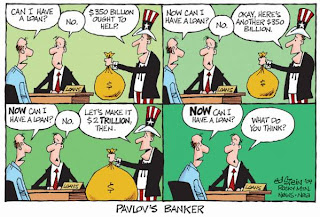 ~ How much would you pay a bankster to hold your cash?


Bank depositors grumbling over how little interest they’re earning on their savings may find themselves having to pay their bank to hold onto their money.

That’s the word from San Rafael-based Market Rates Insight, which has built a business on keeping up with rates and trends affecting banks nationwide.

The firm told its clients last November that banks are likely to start charging customers for deposits. The warnings took on more relevance this week when Bank of New York Mellon said it will charge some large depositors for the privilege of letting the bank hold onto their money.

“It’s very likely that this trend will trickle down to retail customers,” said Dan Geller, executive vice president at Market Rates Insight. “The current economic uncertainty makes it more than likely that consumers will be open to the notion of paying a small premium to protect their principle deposits in return for the assurance that their money is safe regardless of how bad the economy gets.” (emphasis added)

After the past several years who among us believes that there's any safety in banks? There have been lots of failures and it is you and I, along with our semi-autonomous proxy, the federal government, who have guaranteed their losses and underwritten their folly to the tune of hundreds of billions of dollars. And now they want to charge us for access to our paltry savings to use as their speculative playthings, with the confidence that, should they lose on their latest gambles, we will pay again through our taxes and the debt bequeathed our children and grandchildren.

Words fail. I'll go with the mattress, or, as a friend of mine jokes (perhaps?) dig a hole in the back yard to fill with Krugerrands.

With this post, I'm adding a new category label: serfdom, with which I expect to tag posts that refer to the growing economic stratification of the economy and the increasingly brazen way powerful elites are spreading penury, indifferent to sustainable social (or economic) values in their insatiable lust to gild the obscene offerings on their towering altar to greed.
Posted by Unknown at 9:44 PM