Yet Another Kind of Device

~ New York design firm Atelier DNA has come up with an interesting new kind of device for harvesting wind energy: 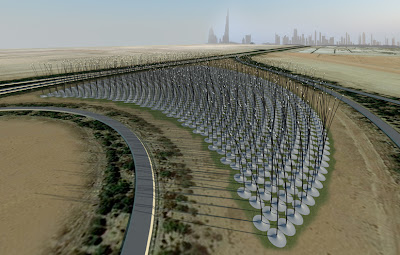 The proposed design calls for 1,203 “stalks,” each 180-feet high with concrete bases that are between about 33- and 66-feet wide. The carbon-fiber stalks, reinforced with resin, are about a foot wide at the base tapering to about 2 inches at the top. Each stalk will contain alternating layers of electrodes and ceramic discs made from piezoelectric material, which generates a current when put under pressure. In the case of the stalks, the discs will compress as they sway in the wind, creating a charge.

It placed in a Masdar City competition and may possibly be first built there. It may also be usable under water to harvest tidal flows or water currents.

The aesthetics are winning, for sure:


Each base is slightly different, and is sloped so that rain will funnel into the areas between the concrete to help plants grow wild.

The top of each tall stalk has an LED lamp that glows when the wind is blowing -- more intensely during strong winds and not all when the air is still. The firm anticipates that the stalks will behave naturally, vibrating and fluttering in the air.

It's claimed that a field of these windstalks can generate as much power in the same square area as conventional wind turbines because they don't require the same spacing for wake effects. That would mean, however, much more hardware, and probably much greater cost for the same power output. Still, the idea is intriguing, and at least a prototype at full scale should be tested out.
Posted by Unknown at 8:17 PM