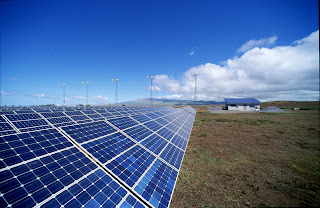 ~ Solar is becoming more and more feasible compared to other forms of generation. The latest:


In an announcement that underscored the growing shift from concentrating solar power (CSP) technology to photovoltaics, especially in the United States, Solar Millennium announced that it would convert its 500-megawatt (MW) project in Blythe, Calif. to PV.

In a press release Thursday, U.S. subsidiary Solar Trust of America, cited the lower cost of PV modules and more favorable lending conditions for the shift in technology.

Construction has already begun on the first phase of the project. When completed, the two-phase project will be 1,000 MW – far larger than any current operating site.