Does Anyone Know the Rules?

~ Shale oil is both being pushed ever-harder, and is under growing scrutiny for its impacts and its evident lack of sustainability. Before posting some current thoughts, I am reposting my earlier overview from the waning months of the Bush Administration. 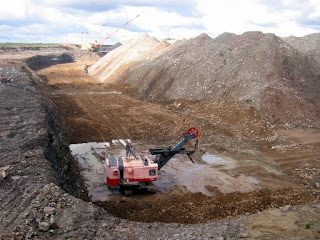 
"Depend upon it, sir, when a man knows he is to be hanged in a fortnight, it concentrates his mind wonderfully."
—Attributed to Samuel Johnson by James Boswell

While many are focused forward on real energy solutions, and most are too enervated to hang even an effigy, almost all are paying close attention to the clock. In these remaining lame duck months the Bush Administration has concentrated its mind around unilateral enactment of regulations, many appearing as favors to its long-coddled industry bedfellows, and few appearing very well thought through. After eight years at an open bar, do the besotted party-goers really need "one more for the road"? Ever the convivial host, this past week Bush announced that oil drilling would be green-lighted within sight of Utah's famous Delicate Arch. Other recent and hasty measures include allowing power plants next to national parks, relaxing rules that protect rivers from mountain-top mining, and removing wolves from the list of endangered species.

This last proposal drew more than 300,000 public comments, which the Department of the Interior, under the rapacious "leadership" of Dirk Kempthorne ("Gale Norton in pants") has said they would review in one week prior to finalizing the rule. One week? If one reviewer worked continuously, 24/7, for a week, that would be a reviewing rate of one comment every 2 seconds. 30 people working continuously side-by-side for that week could lavish an entire minute on each comment, reading, understanding, and incorporating worthy feedback into crafting a better rule. Although monkeys with typewriters would perhaps have only an even chance at producing a more coherent result, at least with monkeys none could attempt to argue that such a slapdash method could produce a considered result.

The proposed oil shale regulations prominently feature royalty rates that appear designed to encourage development by having the taxpayer subsidize the costs. Normal royalty rates are typically 12.5% for oil and gas leases on public land, but BLM offers rates on oil shale starting at just 5% for the first 5 years of production, rising 1% per year until reaching parity with the main rates. Stephen Allred, the assistant secretary for land and minerals management at the Interior Department justified the give-away by saying that developing companies will spend "hundreds of millions of dollars" so the rate is "a compromise" that will "provide a fair return to the American public." U.S. Senator Ken Salazar (D-CO) called it "a pittance." He further criticized the hastiness of the decision in light of the failure by BLM to analyze the potential environmental impacts, and the additional and enormous resource contention that would ensue over dwindling water supplies:


These regulations are premature and flawed. The Bush Administration has fallen into the trap of allowing political timelines to trump sound policy. Over and over again the Administration has admitted that it has no idea how much of Colorado’s water supply would be required to develop oil shale on a commercial scale, no idea where the power would come from, and no idea whether the technology is even viable on a commercial scale.

Previously, the Energy Policy Act of 2005 (EPACT) required the BLM to create a process for granting "research development and demonstration leases" under which companies could apply for 10-year leases on token 160-acre parcels to investigate oil shale extraction and feasibility. The new regulations are clearly consistent with an expansion of activities and commercialization well beyond that envisioned by EPACT. Is oil shale ready?

In 2005, a Rand Corporation study concluded that oil shale development would not be economically feasible using current surface "retort" technology unless crude oil prices were "at least $70 to $95 per barrel (2005 dollars). Stephen Allred, the assistant secretary for land and minerals management at the Interior Department, admitted in a conference call following the BLM announcement that oil shale development "may be profitable in the neighborhood" of oil prices of $60-$80 a barrel "more than the current price" should techniques "under development" work out. The Rand report noted in its summary:


Currently, no organization with the management, technical, and financial wherewithal to develop oil shale resources has announced its intent to build commercial-scale production facilities. A firm decision to commit funds to such a venture is at least six years away because that is the minimum length of time for scale-up and process confirmation work needed to obtain the technical and environmental data required for the design and permitting of a first-of-a-kind commercial operation. At least an additional six to eight years will be required to permit, design, construct, shake down, and confirm performance of that initial commercial operation. Consequently, at least 12 and possibly more years will elapse before oil shale development will reach the production growth phase. Under high growth assumptions, an oil shale production level of 1 million barrels per day is probably more than 20 years in the future, and 3 million barrels per day is probably more than 30 years into the future.

Allred admitted that the technology necessary to commercialize oil shale development does not currently exist, might not for a decade or more and acknowledged that the BLM lacks the information to project demand for leases or the economics of producing shale oil. "Rather than completing the necessary research and development, the Bush administration is rushing ahead with rules for a development process they know little about," said Senator Salazar.

Several oil companies attempted to commercialize oil shale in the early 1980's and Shell has more recently invested at least $200 million developing an "In-Situ Conversion Process" (ICP) that heats the shale in the ground to extract the liquefied kerogen which would then be refined into various petrochemicals:


In a nutshell, ICP works like this: Shell drills 1,800-foot wells and into them inserts heating rods that raise the temperature of the oil shale to 650 degrees Fahrenheit. To keep the oil from escaping into the ground water, the heater wells are ringed by freeze walls created by coolant piped deep into the ground; this freezes the rock and water on the perimeter of the drill site. Eventually the heat begins to transform the kerogen (the fossil fuel embedded in the shale) into oil and natural gas. After the natural gas is separated, the oil is piped to a refinery to be converted into gasoline and other products.

The long term viability of this process is not yet known. Existing methods require vast amounts of water (2.3-5.7 barrels of water for each barrel of oil produced)and energy (more than 40% or more of the energy produced.) Shell reports that its in-situ process will have an EROEI of 3-4, although this might change given the enormous energy costs involved in building and maintaining the frozen water "walls" below ground that would contain the heated shale. Wind power has an EROEI of approximately 20.

Then there are the environmental impacts. Shell's ICP relies on containing the super-heated liquid products under ground, but the efficacy of the freeze-wall technique in actually preventing groundwater contamination is unknown and may have cumulative impacts that cannot be understood prior to actual commercial production (by which time the damage would already be done.) Both strip mining and room-and-pillar mining have well-recognized problems in land use and broad habitat destruction. Air quality, water quality, and greenhouse gas emissions all have uncertain (but large) impacts and costs. The RAND study highlights the serious impact on water usage:


About three barrels of water are needed per barrel of shale oil produced. Water availability analyses for oil shale development were conducted in the early 1980s. These analyses indicated that the earliest constraining factors would be limitations in local water supply systems, such as reservoirs, pipelines, and groundwater development. A bigger issue is the impact of a strategic-scale oil shale industry on the greater Colorado River Basin. Demands for water are expected to continue to grow for the foreseeable future, making the earlier analyses regarding oil shale development outdated.

The BLM, in its own rules [PDF], updates the concern:


While it is not presently known how much surface water will be needed to support future development of an oil shale industry, or the role that groundwater would play in future development, it is likely that additional agricultural water rights could be acquired.

I'm sure the farmers and ranchers will be all over that one. As an old western saying has it, people talk over whiskey and fight over water.

The RAND report concludes that additional research and study is needed, and that development should be at "a measured pace". The final recommendation was for public participation because any development would "profoundly" affect stakeholders; "the federal government should consider fostering the creation of a regionally based organization dedicated to planning, oversight and advice, and public participation."

Canada's experience with extracting oil from Alberta tar sands is instructive, as the techniques of mining and surface retorting are substantially similar. The Natural Resources Defense Council calls oil shale the "dirtiest fuel on the planet". Says Amy Mall, a Boulder-based senior policy analyst for NRDC, "cooking rocks and scorching the Earth is not a solution to our energy crisis," and estimates four-fold larger emissions than from gasoline production. It's "an enormous threat to our environment and a huge backward step."

Nonetheless, despite lack of a viable commercial technology to develop oil shale, despite the environmental damage the similar tar sands efforts are having in Alberta, despite the horrific costs in energy and water required for development, despite the lack of any companies to develop projects in the next 10 years or longer, and despite, by their own admission, BLM's lacking information to project basic demand or economic figures for development, they have offered up rules that amount to a starting gun with bargain basement royalty rates.

Perhaps the public will get lucky and these ill-considered regulations will be voted down on a simple majority vote (without possibility of filibuster) in the 111th Congress. On oil shale this would be a very welcome development. The rush to develop oil shale should be placed in the context of our overall energy needs. In Alberta, it took 30 years to reach an output of a million barrels per day from the oil sands, a level of production that Shell hopes to reach someday in the Green River Basin. The United States consumes approximately 20 million barrels of oil a day, importing about half that, so, while it would help, oil shale doesn't really change much on energy independence or supply either soon or eventually, while it will quickly change the environment for the worse.

While the role of additional oil exploration and new forms of its production in an overall energy policy are subjects for legitimate debate, the public must demand, and lawmakers must consider carefully the full menu of energy alternatives in light of their widely differing environmental and economic costs. In the case of oil shale, little production will occur for many years; there is time to assess it properly. We should take time to assess it properly.
Posted by Unknown at 11:06 PM