Same Slickness On the Sea and in the Response 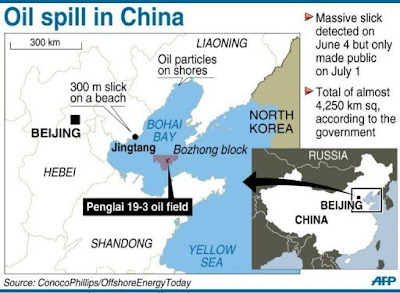 ~ Does any of this sound familiar?


China has called on the US energy giant behind a massive oil spill to speed up its clear-up efforts and issue a public apology after it missed a deadline to clean the sea bed, state media said Thursday.

The State Oceanic Administration (SOA) asked ConocoPhillips to explain why it has taken more than two months to collect oil leaked from two of its drilling platforms onto the sea bed, the official Xinhua news agency said.

ConocoPhillips now blames delay on an impending typhoon, but that's today, and doesn't explain the months of time this spill has fouled the environment. The spill was not made public for nearly a month; perhaps ConocoPhillips was just hoping it would go away without anyone noticing?

Another disturbing parallel with other infamous oil spills: ConocoPhillips now says that the spill may be worse than its earlier estimates.

And a final commonality for those that like to complain about supposedly over-bearing American regulatory oversight, or alleged indifference to environmental damage by the Chinese: the Chinese SOA doesn't seem happy about the policy of secrecy and delay by an oil giant either. No surprise really. Oil is washing up on beaches and the fishing community is angry at the decline of their harvest.

Meanwhile, back in the US, Big Oil and its lobbyists continue their incessant drumbeat of complaints, even as they swear they are responsible offshore actors. Should we believe what they say, or what they do?
Posted by Unknown at 10:36 PM