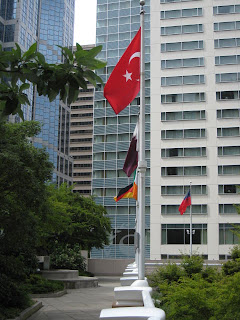 Last week's picture shows the large and colorful flower sculpture by artist Ginny Ruffner at the corner of 7th and Union by the Seattle Sheraton. 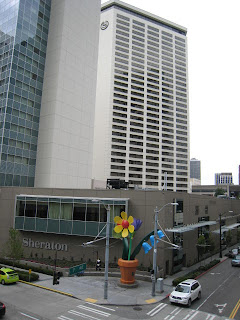 Commissioned by the Sheraton Seattle Hotel ownership group, the 9,950-pound “Urban Garden” sculpture anchors the Garden Walk and will be the largest piece in the hotel’s extensive collection of Pacific Northwest art. While its nine-foot-wide yellow daisy spins continuously, a red watering can will tilt and water a flower pot on a programmed cycle and bluebells will open and close. A window in the base of the flower pot offers viewers an opportunity to watch the interior mechanisms at work.

“I am totally delighted that after a seven year journey the “Urban Garden” sculpture will be firmly and finally planted in the heart of downtown Seattle, a place that I dearly love,” said Ginny Ruffner.

“Urban Garden” completes the Sheraton’s $2.5 million Garden Walk project, which transforms the downtown city block between Pike and Union Streets into a lush greenway. The Garden Walk is designed to create a welcoming pedestrian environment and infuse green space into a central downtown intersection that connects theaters, the freeway, the Washington State Convention Center and the Sheraton Seattle Hotel.