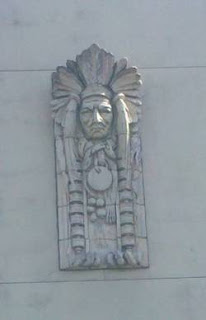 The picture last week was of the permanent artwork Sentinels by Gloria Bornstein next to downtown Seattle's Fire Station 10. The station was built from funds raised in a $167M levy approved by voters in 2003, and is, well, very Seattle:


The building design reflects the City's commitment to sustainability. A 12,000 gallon cistern under the back apron captures water from on-site fire department drills, and the roof provides 100 percent of the water for washing the trucks and watering the green roof. The 15,000 square foot vegetated roof reduces heat given off from the building and slows down water before it enters the storm system. The project is on track for LEED Silver certification.

The art, Sentinels, is one of three on the site:


In 2004, Bornstein, as the design team artist for the Fire Station 10 project, developed an art plan, Different Voices, One Community for the facility. Bornstein recommended the project integrate artwork reflective of the nearby neighborhoods' diverse cultural identities. She proposed Sentinels for the site and identified opportunities for two other artworks. The Office of Arts and Cultural Affairs issued the call for artworks in English, Chinese, Japanese and Vietnamese. Stuart Nakamura and the artist team of Nancy Chew and Jacqueline Metz received commissions for the two other artworks, Call and Response and bamboo, luminous.


The artwork playfully explores shifting perspectives through the placement of eight sculptures, diminishing in scale along the upgrade of the Fire Station 10 sidewalk. The sculptures are inspired by my explorations of protective gear of different cultures and the beauty of Asian architecture and folk craft, reflecting the cultural diversity of the Chinatown-International District and Pioneer Square neighborhoods. The multi-sculptural environment represents the guardians of the city. Just as the staff of the Fire Station 10 facility in the Chinatown-International District is responsible for the public safety of the city, the surrounding Asian community has been standing watch over the interests of their neighborhood.