~ Goethe would smile at the audacity of Atlanta's grand BeltLine vision. It sets a strong example in more than one way: 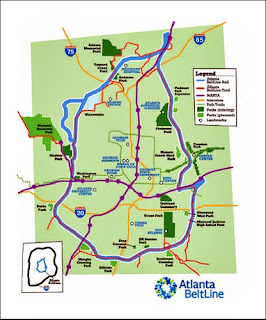 To briefly review the basics, the city is seeking to invest some $2.8 billion in a new, 22-mile public transit, trails and parks loop around the heart of the city of Atlanta on the site of an abandoned rail and industrial corridor. Because the BeltLine passes through some of the inner city’s most distressed neighborhoods, the intent is for this major public investment to leverage substantial private investment in revitalization, particularly workforce housing. The transit is to be either light rail or streetcars, connecting in several places along the loop to the MARTA regional rail transit system.

Around 2000 acres of new, expanded and improved parks are involved, all of which will be linked by a multi-use trail, itself a linear park, along the BeltLine as well as by the transit loop. Many of the parks are being designed to include significant green management features. The project will also involve the remediation of over a thousand acres of brownfields.

The hoped-for economic impacts include 5600 units of workforce housing, 30,000 permanent jobs and 48,000 person-years of construction jobs, and a $20 billion increase in the city’s tax base over 25 years. It’s an incredible bundle of related public benefits if the city and its partners can pull this off.

In this age of contemptuous cynicism, the most remarkable aspect of the BeltLine, however, is that it is happening at all.

We live in an era where government is reflexively reviled as corrupt, inefficient and profligate with the public's money. What money government has goes either to paying existing obligations (payments on debt or the tattered remnants of the social safety net) or to further enriching those who could manage just fine without public money—large banks, large corporations, and large tax cuts for the wealthy.

Yet here is the government of a major American city doing what has become almost unthinkable in the current political environment dominated by social Darwinism and a grasping, heartless austerity:
Even in these early stage of realization, the public is supportive and already making use of these appealing new facets of their community.