The Default Price of Oil

Gas Could be $5 Per Gallon This Year 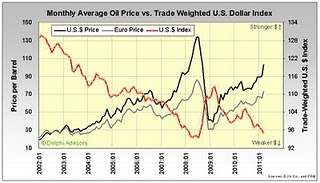 ~ To all the reasons why a US debt default would be very bad, add another one: much higher oil and gas prices.

Even the threat of default is causing jitters in financial markets, especially those that pay close attention to US debt instruments. There is a real prospect of interest rates rising, perhaps sharply. This would have three effects that push oil prices higher:

While each of us as individuals can make some choices to lessen our personal dependence on oil, and so lessen the blow somewhat, as a nation we are much more vulnerable:


No one knows precisely at what point oil begins to substantially hinder consumer spending and slow commercial activity - but this much is known: every $1 per barrel rise in oil decreases U.S. GDP by about $100 billion per year and every 1 cent increase in gasoline decreases U.S. consumer disposable income by about $600 million per year.

With more GDP declines we have the twin effects of lower tax revenues and higher demands for government services, which lead to larger debts and long-term deficits. Wash. Rinse. Repeat.
Posted by Unknown at 11:23 PM