...And Your Roads For Free 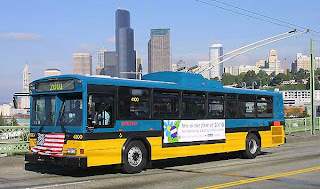 ~ We are steadily hollowing out our country's core strength by refusing to tax ourselves to pay for anything, no matter the public interest. Here in King County battle is joined over whether to add a $20 yearly charge onto vehicle registration to provide funding for Metro, the Greater Seattle regional transit authority.

I am in favor of the levy, despite the fact that I would pay an extra $40 annually in addition to the bus fare I already pay several times a week.

The fee is absurdly small, less than 6 cents per day per car, but that hasn't prevented an outpouring of indignant complaints in response. While there are others, there are two criticisms I have heard repeatedly: (1) cutting costs should happen first (or solely), and (2) it is unfair to make non-transit riders pay a tax to subsidize something they don't use.

These two criticisms are stock complaints against public funding of almost anything, and can be heard in opposition to everything from defense spending to funding for the arts. Neither withstands scrutiny, and the outrage is usually highly selective.

A friend of mine, also a regular bus rider, criticizes the fee request and complains that Metro could be much more efficient. He takes issue with the route management: some buses seem horribly overcrowded while others run nearly empty. He also questions why drivers turn on the air conditioning even when the day is temperate, making the bus uncomfortably cold. These are valid criticisms, and I share them, for I have also witnessed these same things. He argues that controlling wasteful costs should be (part of) the solution.

However, such cost refinements will not close the budget gap. More revenue is still needed as Metro has depended on sales tax revenue, a funding source which has declined sharply with the anemic economy. Demanding the long and painstaking process of making these cuts before replacing the lost revenue is unreasonable. If such cost cuts were easy and substantial they would have been made; the reason they haven't is not due to administrative perfidy, but rather the scale of the savings achievable. If you are morbidly obese you will not lose much weight by having a haircut.

Now think of our national politicians' endless inveighing against "waste, fraud and abuse" (the real problem and its solution here.) If it were so easy it would have been done. Is there such hiding among the good expenditures? Of course. Always. But it won't balance a budget, and to pretend otherwise is either demagoguery or deliberately avoiding the hard work of really dealing with the problem. So too here. Finally, we don't refuse to fund Medicare or the Pentagon until they first cut these supposedly large amounts of fat, do we? No, we fund them to their needs, and (we hope) appoint competent leaders to optimize the operations, promote efficiency, and get maximum value for our tax dollar. We do not punish those who depend on the program in some misguided effort to coerce administrators into doing a better job.

The idea that it is somehow unfair to make vehicle owners pay a tax to support public transit is even sillier.

First, a good system of public transit benefits those who never use it to the extent others use it more. More people in buses means fewer people in cars, and that means less traffic, less congestion, and an easier time (and possibly lower cost) of finding parking.

Second, my taxes disproportionately support vehicle owners, not public transit. For example, I indirectly pay gas taxes to the extent Metro buys fuel and I pay to use Metro. What about all those roads I never drive, and on which no buses run? Why should I pay for those?

The outrage is highly selective. Where else do reasonable people make such an argument? We do not refuse to pay taxes to support the fire department because we never have a fire. Some of my taxes go to fund social services I don't use, purchase weapons systems that are never deployed, and maintain parks I never visit. Does that mean these programs have no value? Not to me perhaps (although this too can be argued), but possibly to others. Should they be eliminated? Maybe, but that is why we elect council members, representatives, governors and others—to establish the priorities and assemble all the line items of a complete budget that in its entirety provides (we hope) for the common good.

The idea that we can withhold some of our taxes because we disagree with the specific expenditure, or that we don't personally benefit by it is nutty, and at odds with our very system of governance. My taxes are constantly being used to pay for things I don't want, or don't use, or don't think government should be doing (oil industry subsidies.) But my disagreement is not based on my not directly benefiting, but on fundamental policy differences (oil companies don't need subsidies and we can't afford them.)

If people think government should not be involved in providing or paying for public transit, let them make that argument on the merits. I disagree, but there is room for honest difference of opinion and respectful debate. Saying I shouldn't pay because it doesn't directly benefit me would, if consistently applied, vitiate all functions of government. It wouldn't be some libertarian ideal, it would be Somalia. I don't want to live there.

Public hearing Thursday night in Burien. Go and be heard, or sign the petition.

Update: Fixed spelling/grammar. Where is my editer editor?
Posted by Unknown at 9:52 PM