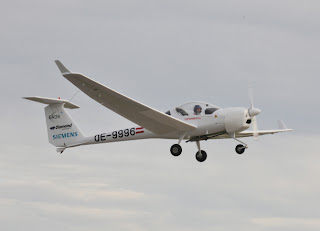 ~ It's long been thought that replacing liquid fuels in airplane power-trains would be nearly impossible. Apparently not:


Similar to General Motors' Chevy Volt drive train, the DA36 E-Star uses a serial hybrid electric drive train in which a main engine is powered alternately by a gasoline-powered generator and batteries.

A 70-kilowatt Siemens engine runs the aircraft's propeller. That engine is powered alternately between a small Wankel combustion engine made by Austro Engine that runs on gasoline and acts as a generator, and EADS batteries. Additional EADS batteries are used during takeoff and ascent.

The plane first flew a month ago in Austria but made its public debut two weeks ago at the Paris Air Show.

Boeing should worry; EADS is the parent company of arch-rival Airbus and the development target is obvious:


While it's in early development, Siemens claims its drive train can be scaled up for use on a large passenger plane, and under further development hopes to create a drive train that can save 25 percent in fuel consumption.

Can we compete with biofuels?