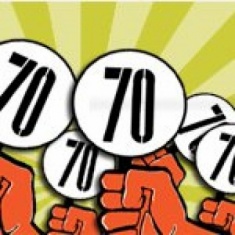 ~ Tim DeChristopher is a political prisoner in the United States.

DeChristopher was sentenced today to two years and fined $10,000 for two felonies (really) based on non-violent acts of civil disobedience. DeChristopher bid in an auction of oil leases in an effort to highlight the destructive effects of the fossil fuel industry, their impacts on climate change, and the corruption of our government by indstry wealth and power. The auction was later found to be illegal, and rescinded, but that didn't stop our government from a politically motivated prosecution.

Details of the allegations and the trial here. DeChristopher's web site here.

But the best thing to read about this sorry travesty of American justice is his final statement to the court. Excerpts:

[Federal prosecutor] Mr Huber also makes grand assumptions about my level of respect for the rule of law. The government claims a long prison sentence is necessary to counteract the political statements I’ve made and promote a respect for the law. The only evidence provided for my lack of respect for the law is political statements that I’ve made in public forums. Again, the government doesn’t mention my actions in regard to the drastic restrictions that were put upon my defense in this courtroom. My political disagreements with the court about the proper role of a jury in the legal system are probably well known. I’ve given several public speeches and interviews about how the jury system was established and how it has evolved to it’s current state. Outside of this courtroom, I’ve made my views clear that I agree with the founding fathers that juries should be the conscience of the community and a defense against legislative tyranny. I even went so far as to organize a book study group that read about the history of jury nullification. Some of the participants in that book group later began passing out leaflets to the public about jury rights, as is their right. Mr Huber was apparently so outraged by this that he made the slanderous accusations that I tried to taint the jury. He didn’t specify the extra number of months that I should spend in prison for the heinous activity of holding a book group at the Unitarian Church and quoting Thomas Jefferson in public, but he says you should have “little tolerance for this behavior.”

But here is the important point that Mr Huber would rather ignore. Despite my strong disagreements with the court about the Constitutional basis for the limits on my defense, while I was in this courtroom I respected the authority of the court. Whether I agreed with them or not, I abided by the restrictions that you put on me and my legal team. I never attempted to “taint” the jury, as Mr Huber claimed, by sharing any of the relevant facts about the auction in question that the court had decided were off limits. I didn’t burst out and tell the jury that I successfully raised the down payment and offered it to the BLM. I didn’t let the jury know that the auction was later reversed because it was illegitimate in the first place. To this day I still think I should have had the right to do so, but disagreement with the law should not be confused with disrespect for the law.

This is really the heart of what this case is about. The rule of law is dependent upon a government that is willing to abide by the law. Disrespect for the rule of law begins when the government believes itself and its corporate sponsors to be above the law.

Mr Huber claims that the seriousness of my offense was that I “obstructed lawful government proceedings.” But the auction in question was not a lawful proceeding. I know you’ve heard another case about some of the irregularities for which the auction was overturned. But that case did not involve the BLM’s blatant violation of Secretarial Order 3226, which was a law that went into effect in 2001 and required the BLM to weigh the impacts on climate change for all its major decisions, particularly resource development. A federal judge in Montana ruled last year that the BLM was in constant violation of this law throughout the Bush administration. In all the proceedings and debates about this auction, no apologist for the government or the BLM has ever even tried to claim that the BLM followed this law. In both the December 2008 auction and the creation of the Resource Management Plan on which this auction was based, the BLM did not even attempt to follow this law.

And this law is not a trivial regulation about crossing t’s or dotting i’s to make some government accountant’s job easier. This law was put into effect to mitigate the impacts of catastrophic climate change and defend a livable future on this planet. This law was about protecting the survival of young generations. That’s kind of a big deal. It’s a very big deal to me. If the government is going to refuse to step up to that responsibility to defend a livable future, I believe that creates a moral imperative for me and other citizens. My future, and the future of everyone I care about, is being traded for short term profits. I take that very personally. Until our leaders take seriously their responsibility to pass on a healthy and just world to the next generation, I will continue this fight.

DeChristopher was taken into custody on the spot, and is now a prisoner. Meanwhile, the total number of people jailed (or even charged) for the Massey Coal accident that (directly) killed 29 people plus the BP Deepwater Horizon disaster that killed 11 and destroyed the economic well-being of thousands? Zero.

As DeChristopher asked the court, and by extension our government, our elected officials, and all of us as citizens:


Whose side are you on?