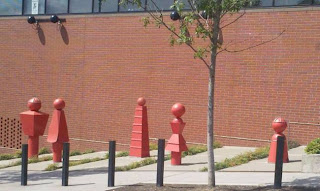 The picture last week was of the downtown Banana Republic store at 5th and Pike. 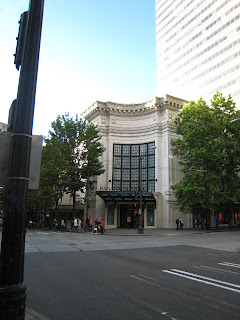 Its life in retail is relatively recent. The ornate building opened in 1916 as the Coliseum Theater, and was billed as "the world’s largest and finest photoplay palace":


The exterior features elaborate terra cotta work, and the original interior was comparably ornate. When it opened in the silent film era, it boasted a 7-piece orchestra plus an organist; the giant organ was made by Moller, and the musicians—all Russians—were reputed to be the highest-paid movie theater musicians in the country. Anita King attended the opening night to give a speech dedicating the theater.

Its lavish appointments and decades of life were eulogized by its last manager when it closed in 1990. The last person to sign the registry available on closing night wrote:


“Perhaps I am the last one signing this precious book. As someone from the old world (I am an exchange student from West Germany) my heart cries to see that this wonderful place is shut down.

This nation, this generation, this town, erases one of the most historic lankmarks this country has. It’s just as if somebody wanted to tear down the Opera of Vienna of the Eiffel Tower in Paris. Do I exaggerate? No. This is magnificent art, this movie palace. NOBODY EVER will spend the money to build something so magnificent and beautiful as this. None of your grandchildren will be able to feel and experience the atmosphere in which the first movies were run, accompanied by live orchestra and pipe organ. This is such a magnificent tribute to American film history. Thousands of people in this state and if each of them would step forward it could be saved, but each one thinks it is the responsibility of the other, which makes dictatorships here and everywhere. Stand up and act. The tiniest grain of hope is better than none.” Christian Roehr