To Advance Clean Energy Do We Need A Republican President?

Strange Days Have Found US 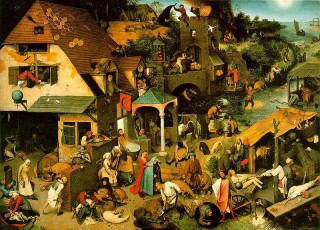 ~ In this era of triumphalist partisanship it seems little gets done even if the President's party supports it. President Obama, a Democrat, could not get a real clean energy bill done in his first two years even with his party controlling Congress. With Republicans controlling the House, the prospects of any energy bill, much less one that weans the country away from dirty legacy sources, appear poor.

Would a sane and forward-looking energy bill, one containing real and sustained policies to promote clean energy, conservation, mitigating climate change and practical steps for energy independence and security actually succeed with a Republican president? The answer: likely yes. In fact, it is probably the only way that it could.

It took Republican Richard Nixon to create a diplomatic rapprochement with China. Politically, no Democratic president could have done this in the face of Republican opposition.

It took Democrat Bill Clinton to enact sweeping changes to federal welfare. Politically, no Republican president could have done this in the face of Democratic opposition.

A president can almost always bring along at least a healthy plurality of his own party regardless of what he advocates. Party loyalty is good for votes--nearly all of them for the ideologically lock-step GOP, but most even for the notoriously fractious Democratic caucus.

We no longer have the "tyranny of the majority" of which de Tocqueville wrote, but rather a bizarre new tyranny of the minority. It is increasingly the party "out  of power" that controls what legislation can actually emerge from the legislative sausage factory.

Admittedly, the Republicans have this much better figured out and are more disciplined at it, but perhaps the Democrats are catching on. Thoughts of being effective, i.e. of enacting anything into law, may be what has guided Obama throughout his presidency to make what appear unilateral concessions to his political opposition. We are seeing it again this week as he suggests wholesale changes, including non-trivial cuts to Social Security and Medicare. Only a Democratic president could propose such a policy successfully (if that's the right word.) His own party may squawk and complain, but at least some will go along out of party allegiance, and that will likely be enough.

Such an approach abandons almost all ideological tenets and becomes utterly pragmatic, vivifying politics as the art of the possible. The approach is focused solely on getting legislation passed. It may not produce very good legislation, or very consistent with other legislation, or follow any broader theme or vision, and it may alienate many supporters even as it delights and somewhat confuses opponents. But it is effective, if by the term we mean what many Americans say they want most--getting something (anything) done, having effect.

I have been reading lately of how some of the GOP contenders for the 2012 presidential nomination have changed their positions on climate change, or on cap-and-trade, or on biofuels, or on other elements of clean energy. Obfuscate and hair-split as they may, there is ample record to show that many have changed their positions. However, in the new topsy-turvy political calculus it is all perfectly rational.

For example, cap-and-trade, part of the ill-fated Waxman-Markey bill of 2009, was originally a Republican idea, based as it is on a fundamentally free-market construction for allowing individual economic players, each acting in their own interest, to create a more efficient market result by factoring in to economic transactions the currently externalized costs of carbon pollution. Waxman-Markey failed in the Senate over united Republican opposition (as well as from a few fossil-fuel captive Democrats.) Why? It was urged on (however dyspeptically) by a Democratic president but it had been changed into too much of a Democratic idea; specifically, it raised revenue for the government. No wonder the current GOP must run against it; the policy was foolishly recast as a tax, and no Republican candidate will survive the primaries supporting a new tax.

However, a President Romney or a President Hunstman could take this now-Democratic policy idea and tweak it just enough, e.g. by pairing it with offsetting corporate tax cuts to push it through a Republican Congress. Many, but not all, of the Congressional GOP would vote against it (as their primary voters in the next election won't grasp the nuance) but most Democrats would support it. Voila! A real climate and energy policy passed by Republicans, but looking very much like a Democratic plan. This same kind of political ju-jitsu was the modus operandi in British Columbia that allowed passage of their now widely-embraced and effective carbon tax.

Could it happen here? It may be our best hope.
Posted by Unknown at 11:16 PM