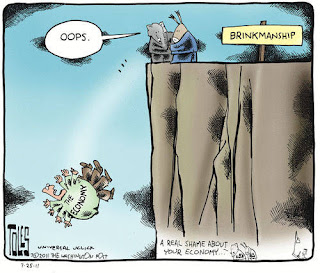 While pundits all talk as if a default is unthinkable, I'm starting to wonder: are there some who actually want a default? For some Congressional Machiavellians: yes. Here's why:

There would be pain of many kinds, one of which is the potential for a US debt ratings downgrade. Regardless of whether that occurred (and there is a small chance that with a "technical" default it might not), there is little doubt interest rates would go up, perhaps a lot. The effect of that would be less money available for spending on anything else, as more would have to go to paying interest.

For individuals, that means even more belt tightening, and probably (with perhaps a touch of suggestive prodding) more talk of needing tax "relief" (i.e. cuts) to help "America's hardworking families" weather the even tougher economic times.

For businesses, that means less free cash flow, and probably (again, with only the slightest insinuation) calls for, you guessed it, more tax "relief" (i.e. cuts, loopholes and credits) to help "America's job creators" get "back on track" and start hiring.

For government, that means larger budget deficits, which, if nothing is changed, means additional growth of the national debt, and a deeper economic mess. We still have the same problem, but now it's worse.

So what will our politicians then suggest? Right! More tax cuts to help out beleaguered families and businesses, i.e. the very opposite of raising taxes, closing loopholes, shared sacrifice, etc. To deal with the debt (and its effect on the deficit) from even less revenue then, there is only one thing left to do: even more severe spending cuts.

For austerity's ideological foot soldiers, the best outcome in this coming week of economic brinksmanship is capitulation by President Obama and those calling for a "balanced" approach (spending cuts and sensible, modest revenue increases.) The next best outcome is no deal at all, and a spike in interest rates. It will achieve the same result, but without their being able to claim political scalps. The way the game is set up they either win, or there is no deal, and they still win. The only way they lose is if there is a deal where they compromise. The economy and the country would be better off, as would America's families and businesses, but they have talked their way into a position where they would be perceived as losers politically. And to them, the politics are all that matter. Whatever happened to "Country First"?

The unbalanced approach pushed relentlessly by today's GOP calls for even more sacrifice by America's families, small businesses, and populations already struggling with limited resources and 30 years of stagnant wages. The true face of trickle-down economics has also appeared in service reductions, as the federal government cuts block grants to states, and local governments see their revenues shrink in turn. Meanwhile, those at the top of the economic heap, who have seen their wages and incomes surge, are not asked to make any sacrifice at all. This is not shared sacrifice for our common good and the country's economic health; it is a vicious and unapologetic version of "I'm alright, Jack."

There are some things government needs to do, and they are worth paying for. A refusal to ever, ever, raise taxes is not a policy that works, as history has shown. Endless tax cuts are insane, and we are all now feeling the crazy. The battle this week is not just over the debt and the deficit, or over transient partisan advantage. It is over the very future of our country, and whether we can constructively compromise and solve our very real and pressing problems, or whether we will fully embrace political and economic nihilism.
Posted by Unknown at 11:47 PM