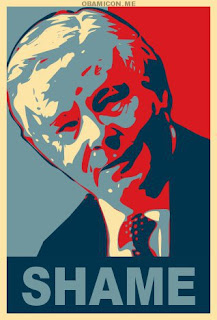 ~ The Republican knee-jerk response to anything promoting cleantech or energy efficiency is to try to kill it. They seem committed to preventing the United States from being competitive in the next globe-spanning, economically enormous, job-creating industry, preferring to cling to fossil fuels until the Earth is dry. (And then what?) The latest nose amputation and face-spiting maneuver:


In a move that could be called anything but conservative, Republican lawmakers are set to bring a bill to the House floor next week that will repeal state and municipal rights to set efficiency standards for lightbulbs. The bill would unravel a piece of federal legislation that was strongly supported by lightbulb manufacturers and has spurred innovation in the lighting industry.

The bill, sponsored by Texas Republican Joe Barton, would strip away any "federal, state or local requirement or standard regarding energy efficient lighting" that uses lightbulbs containing mercury. In other words, all compact fluorescent bulbs.

He wants to roll back legislation that was passed with broad bipartisan support and signed into law by famous bleeding heart liberal George W. Bush. The legislation has broad industry and consumer support. How many politicians does it take to change a lightbulb? Both too many (that are obsessing on something that doesn't need fixing, especially compared to what does) and too few (taking just one wingnut to waste the time of the entire Congress.) Joe Barton is a truly dim bulb. A sampling of some of his more embarrassing utterances:


I would also point out that CO2, carbon dioxide, is not a pollutant in any normal definition of the term. It’s not hazardous to health, it’s naturally occurring. I am creating it as I talk to you. It’s in your Coca-Cola, you’re Dr. Pepper, your Perrier water. It is necessary for human life. It is odorless, colorless, tasteless, does not cause cancer, does not cause asthma.
And something that the Democrat sponsors do not point out, a lot of the CO2 that is created in the United States is naturally created. You can’t regulate God. Not even the Democratic majority in the US Congress can regulate God.


I have one simple question for you in the last six seconds. How did all the oil and gas get to Alaska and under the Arctic Ocean?

And of course, his defining moment, the famous apology to poor beknighted BP after the Deepwater Horizon disaster:


I'm ashamed of what happened in the White House yesterday. I think it is a tragedy in the first proportion that a private corporation can be subjected to what I would characterize as a shakedown -- in this case a $20 billion shakedown ... I apologize. I do not want to live in a county where anytime a citizen or a corporation does something that is legitimately wrong, [it is] subject to some sort of political pressure that, again, in my words, amounts to a shakedown.

The current law could save $12B or more in annual energy costs, and obviate the need for 30+ new electric power plants. It also provides that heady elixir conservatives tout as a panacea for our economy—business confidence:


The 2007 efficiency standards weren't just about saving energy -- they were also about providing manufacturers with a consistent marketplace. With numerous states passing minimum standards for lighting, companies were looking at the prospects of having to produce different bulbs for different states. When the law was passed in 2007, it created a national marketplace that was deemed good for business, says Jeffrey Harris, the senior vice president for programs at the Alliance to Save Energy.

"Repealing this standard would undercut manufacturers' confidence," Harris says. "This has been all about creating market certainty that would encourage more innovation -- and it's worked. Why would we want to take that away?"